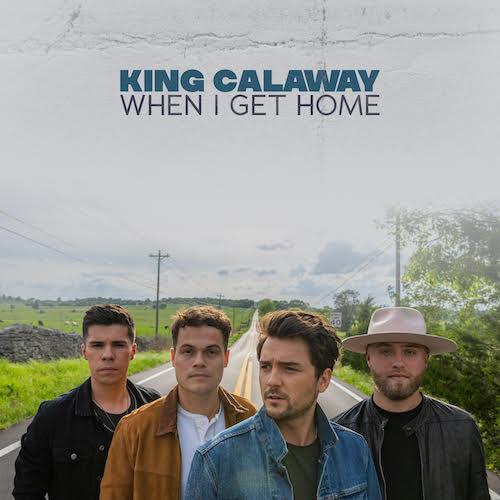 Listen Now to ‘When I Get Home’ HERE

“One of Country music’s fastest rising bands” (The Late Late Show with James Corden), King Calaway has joined forces with founder, frontman, and lead vocalist for the multi-platinum, Grammy Award-winning group Zac Brown Band, Zac Brown, for their newest track ‘When I Get Home’. Produced and co-written by Brown, listen to ‘When I Get Home’ now HERE.

Celebrating the release, on Thursday (9/6) King Calaway made a surprise appearance during Zac Brown Band’s CMA Fest performance at Nissan Stadium in Nashville, when Brown welcomed the band on stage to perform the new song to an energetic, packed-out crowd.

“I recognized the talent this young group has and when we started working in the studio so much more unfolded, and I believe in these guys,” Brown exclusively told People. “When Keith Stegall bet on me and helped me make my first album that was the launch of my career. I believe this track can do the same for them, and it’s great to be able to give back. I really love producing people that have the talent and the hustle to make it out there. This is an exceptional group of guys. I’m very proud of what we have written and made. Lots to come from King Calaway.”

After hearing the band’s new sound, seeing their vision and the direction they’re headed, Brown was passionate about being their producer and brought the guys the song he had just written, alongside Jonathan Singleton and Ben Simonetti, called ‘When I Get Home’, knowing the intricate song would be best brought to life by King Calaway’s masterful instrumentals and crystallised harmonies.

A love letter to a past love, the new track finds a man on the brink, owning up to his past mistakes and longing for another chance. The band – comprised of Chris Deaton, Simon Dumas, Chad Michael Jervis and Caleb Miller – knew from the moment they heard it that they had to cut it.

“The song is about grace and overcoming challenges to better yourself,” says Chris Deaton. “I think anyone can relate to the lyrical message.”

“The lyrics, melody, the harmonies, everything about it and everything we were able to put into it is so soulful and truly represents us as a band,” adds Jervis.

Recorded at Brown’s Southern Ground Studio in Nashville, King Calaway’s ‘When I Get Home’ is available now and is just the first of even more Zac Brown-produced new music coming later this year.

One of country music’s rapidly rising bands, King Calaway is proof that there’s strength in numbers. Their debut album, Rivers, released October 2019 on BBR Music Group/Stoney Creek Records, featured the hit single ‘World For Two’, which was the No. 1 most added song at Country radio in its debut week. Named as one of the seven new Country acts to watch out for by Billboard, the band continued to take the Country music industry by storm, from multiple performances at the famed Grand Ole Opry - including an incredible performance moment with the legendary Ricky Skaggs - to making their late-night television performance debut on Jimmy Kimmel Live! and an appearance on the internationally acclaimed showNeighbours. They’ve since performed on The Late Late Show with James Corden, TODAY and The Kelly Clarkson Show and brought their energetic live show to various stages, including CMA Fest and opening slots for Garth Brooks, Rascal Flatts, Gabby Barrett and Scotty McCreery. Comprised of Chris Deaton, Simon Dumas, Chad Michael Jervis and Caleb Miller, King Calaway has now joined forces with the multi-platinum, award-winning Zac Brown for their newest track ‘When I Get Home’. Produced and co-written by Brown, King Calaway’s intricate new song is available now and is just the first of more Zac Brown-produced new music coming later this year.