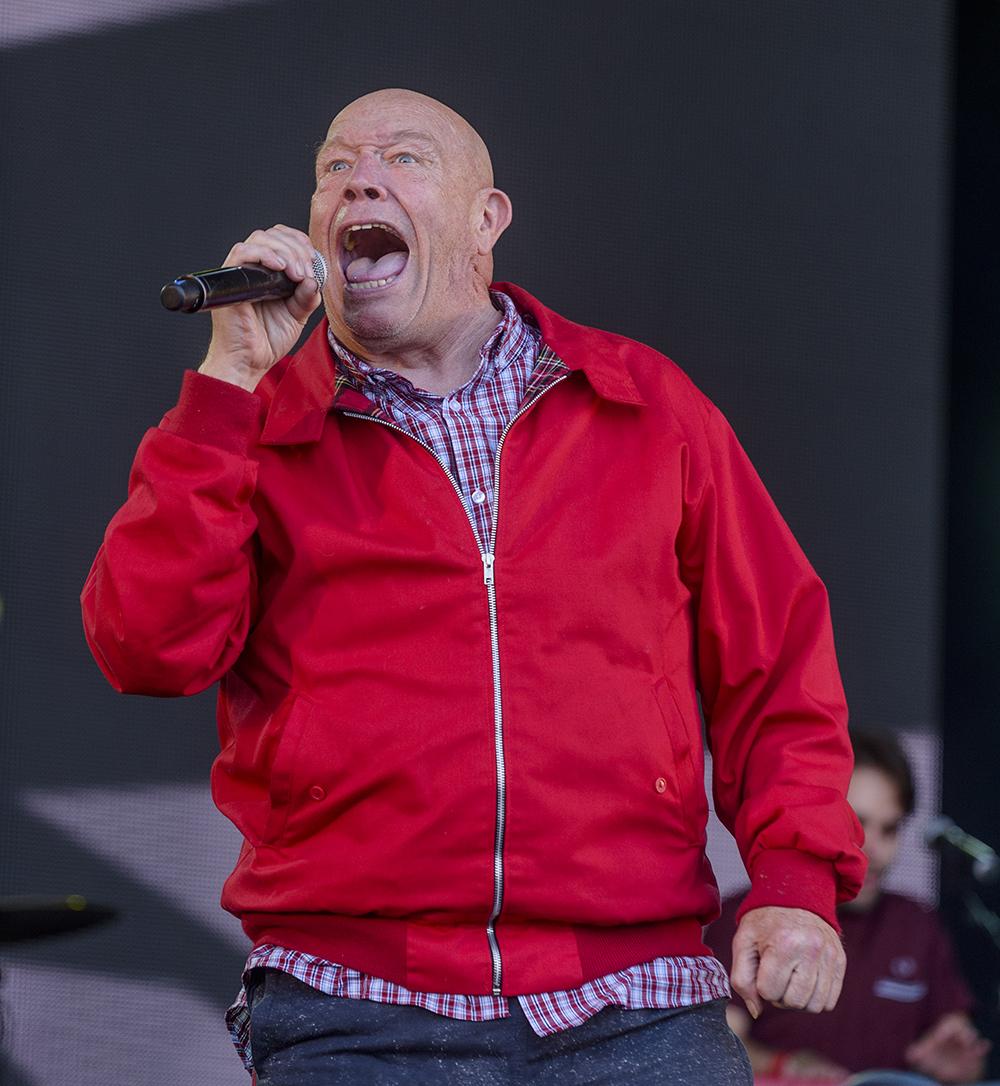 The Ocelot’s Jessica Durston spoke to the larger-than-life two-tone legend about his upcoming festive shows.

It was a joy to talk to the infamous Buster Bloodvessel (aka Douglas Woods) of Bad Manners. The man was one of the key individuals responsible for the spreading popularity of Ska music back in the 1980s. I know that in 2021, I cannot be the only one to still feel compelled to get up and dance whenever I hear ‘Special Brew’ or ‘Lorraine.’ For many people, he is known for his crazy antics on-stage and for thrusting his larger-than-average tongue out at audience members, or any film camera within close proximity. After conducting this interview, I was certain of one thing - although Buster is now in his 60s, he is still a larger than life character, and is showing no signs of stopping or slowing down.

When listening to any Bad Manners track, you cannot help but want to get up and dance. Ska is infectious and rousing. Why do you think the genre, and your music speaks to people, and continues to amass a large following?

“Yeah, you’ve pretty much summed it up there. it is get-up-and-go dance music and people love that about it.

The fact that not many other people can do ska music the way we do it, I think has been the reason behind our longevity. I think we’re quite unique in that respect. I don’t know any other bands that have quite the power that we do when it comes to a live gig. We always do well live and of course, that too gives us our longevity.

I can see us going for another ten years at least. Younger people really get into it and I really appreciate it.”

Do you think a lot is owed to your on-stage performance and how your band choose to go about playing the tracks, and whipping the crowd up?

“Of course, definitely. It’s something I have worked at for years – to give that good performance with the great songs that are behind me, followed by the good musicianship of the band. I mean I’m a very lucky boy so I can’t really do wrong when I’m on stage.

I see it as my job to get the crowd going and to make them feel like they’re having the time of their lives – which I think I do do.”

So you are about to embark on a big December tour, just in time for the festive season. Are you happy to be back on the road performing after lockdown?

“Well I think because last year was such a disastrous year, it’s nice to get back to doing our Christmas tour. We always usually do one and I almost feel like we’re part of Christmas itself.

I haven’t really had time off gigging since I was 16. I enjoyed my time away but at the same time I was already thinking ahead of the next year and how we would put on a big nationwide tour to make up for it.

It is 23 dates long, and there are still more gigs coming in the pipeline now! The schedule is going to take it’s toll on us but we can’t wait.

We have around 30 members that make up Bad Manners, so some of them won’t make it all the way through the tour but that’s just what happens. Having a large number like that allows for occasions where some people might not be able to play. If someone gets ill or if they’ve had too much to drink or are physically exerted, then we know we still have others ready and waiting!

We always keep a big squad around us and we are more like a big family. We don’t argue much and when we all get together and see one another again, we’re just happy. It’s a unique situation.

I’m the only original member in the band and I’m like the head of this outfit – I’m like the Father Christmas! The first 10 to 12 years of our career as Bad Manners was with the original members but around 30 years ago now we went seperate ways and had different plans.

We’re all still friends and the other original members are still part of this Bad Manners family we have going on. They still come round to see us or come to the gigs. It just means a lot of Christmas presents – I think my Christmas present list would shock anyone!”

Now that you are back to gigging and have time to reflect, how was lockdown for you as a performer? What was that experience like?

“It was horrible. I was banging my head against a wall. You end up running up debts that were just outrageous because you had things in place that couldn’t happen any more because of covid. I had vehicles scattered all over the world – not just this country.

It drove me mad. I’m someone who can’t sit still, not even for one day you know? I pushed myself into opening a bar. It was a bar in Bulgaria, which was quite fun. I stayed there the whole time. I got my vaccinations done over there too – it’s where I live at the moment. I’m back in London at the moment, but I’ve got a home there.

The fans out there are also desperate for it as we haven’t been there for two years. I did a day of Mexican interviews yesterday - we did around six of them. Every one of the interviewers said, ‘we cannot wait for you to come here Buster. We need some life!’ I’m really looking forward to it.

The period that we’ve already played after coming out of lockdown has also received an unbelievable response from people. They’re so desperate to dance and have a good time and I am so desperate to perform for them.”

Does the safety aspect of gigs concern you as covid still hasn’t gone away?

“I have been worried about it, and initially my thoughts were that if covid was lingering in the air, we might be likely to catch it in the band and maybe some of the audience might too. I was a little concerned but fingers crossed - nothing bad has happened so far.

We’re all jabbed up and I think naturally, people are going to get flus and whatever else is floating around and we are likely to catch those sort of things, but it’s just about keeping an eye on how far that goes.

Venues now are going out of their way to make sure the atmosphere is a clean as possible and that all touchable surfaces are clean as well. Between them and the jabs, I think we should be alright. But I mean it does worry me at times, you are right.”

What can fans expect from your December shows? Will it be a case of playing all the favourites or do you have any new material on the set list?

“It’s going to be intense and we will put on an amazing show this Christmas. We will probably play for an hour and a half on each date. We will likely do all the covers and all of our hits. We want to play the tracks that people associate with Bad Manners – you know, the ones that people like.

We are also hoping to get a special Christmas stage setup – we have some ideas and something silly in mind for the show.”

Are you a Christmassy person? How do you normally celebrate?

“The band usually always have Christmas day off – we’ve played gigs in the past on 25 December but the majority of the time we will have time off.

This year we have Christmas Eve and Christmas Day off but already somebody has asked me to do something special for their pub and I’ve sort of agreed on it. This is probably because I’m a workaholic and I just love to make people happy. I don’t like to disappoint people.

When I’m not gigging though, I like to go and celebrate with my daughters. I now have a granddaughter and I’m looking forward to spending time with her this Christmas. She’s four now and her birthday was on Halloween. It will be nice to see her.”

Do you have any new projects in the pipeline? Are you and the rest of Bad Manners working on any new material?

“Next year we are planning to sit down and write a new album. This is something we haven’t done for quite a few years. This project was something we were going to do in lockdown but because of the distances between band members and the fact we couldn’t actually meet, we decided not to do it.

Last year after lockdown finished and once we got together, some of us in the band had written down some ideas. We had a good discussion and listened to everything. Some ideas were good, and some ideas were not so good. We knew we had this Christmas tour coming up, so we thought we’d just leave it for now and then tackle it next year.

It’s interesting to write collectively with a lot of people. If someone in our group comes up with the idea themselves and starts work on it, they will be credited individually, but if it’s something that we come together as a group to write – which is what we prefer to do – then it will be credited to Bad Manners.

This being said, you also need someone to, sort of, have the ears and listen to what’s going on. That person’s really me, as I’m the singer. I get that position luckily. It helps that I’ve done a lot of production in my time, and I know my way around a studio. I know that technology does always overtake you though! My ears have always been good so I rely on them.

I’ve had a few record labels in my time and I just really enjoy the whole process of making music. I don’t think nowadays I would want to put music out myself on my own record label though. I’ve been in contact with some labels that have already said that if we have anything, they will put it out for us, so we know there are those out there that wants us. It’s just now a case of coming up with the goods.

Bad Manners are going to take most of January off, but by the end of the month, we are going to start writing songs. I think a lot of people are very interested to see if we can still do this or not – but I’m sure we can.

The main thing is that we still keep our Bad Manners-ness about us and create music that people will have fun to.”

Tickets for the Bad Manners December tour are available from https://www.seetickets.com/

More information about the band can be found at https://www.facebook.com/badmanners40yr