Charlie Worsham Returns With “Fist Through This Town” 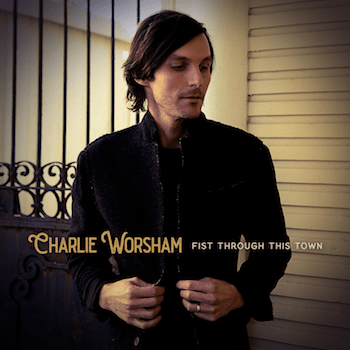 CHARLIE WORSHAM RETURNS WITH “FIST THROUGH THIS TOWN”

Produced by Jay Joyce (Eric Church, Miranda Lambert) and written by Worsham, Jeremy Spillman and Travis Meadows, “Fist Through This Town” expresses the anger, struggle, frustration and, ultimately, the love that Worsham has experienced throughout his career as an artist.

Reflecting on the song, Worsham shares, “I think we all go through those times when it feels like the world is against us, and that’s especially true for anyone who dares to chase down their dream. ‘Fist Through This Town’ fell onto the page late one solitary night in a little house I used to rent on Lillian Street. It was fueled by whiskey and a season of frustration, watched over by a painting of George Jones hanging on the wall, illuminated by the glow of hand-me-down lamps. ‘Fist’ was the first time I got that honest with myself about my anger. My hope is that this song can be rocket fuel for everyone else out there struggling to will a dream into existence.”

“Fist Through This Town” is Worsham’s first new music since his 2017 album, Beginning of Things, and furthers his reputation as an artist with “undeniable musical talent” (NPR Music). Released to overwhelming critical acclaim, Beginning of Things landed on several “Best of 2017” lists including Rolling Stone, Variety, PopMatters, Nashville Scene and Vulture, who praised, “a multifaceted talent—a warm, thinking singer, hook writer, and picker—and one of the most well-regarded underdogs in Nashville.” Moreover, The Wall Street Journal proclaimed, “arguably the most blatantly talented multi-threat younger man in country music… a fiery guitar picker; a rangy, affecting song interpreter as a vocalist; and a witty yet compassionate collaborating songwriter” and American Songwriter declared, “one of country’s most formidable dark horses, a quiet contender worthy of the attention and airplay claimed by his less cerebral contemporaries.”

Since the release of his 2013 debut, Rubberband, Worsham has established himself as one of Nashville’s most beloved and well-respected artists. In addition to his own music, he’s a frequent collaborator including work with Dierks Bentley, Eric Church, Brandy Clark, Luke Combs, Vince Gill, Kacey Musgraves, Marty Stuart, Carrie Underwood and Keith Urban among several others. He also earned a nomination for Specialty Instrument Player of the Year at the 55th ACM Awards and has toured extensively across the world including numerous shows performing as of part of Old Crow Medicine Show as well as dates with Miranda Lambert, Little Big Town, Kenny Rogers, Lee Ann Womack, Tim McGraw and Faith Hill.

ABOUT CHARLIE WORSHAM:
Charlie Worsham has never had a back-up plan. The acclaimed singer / songwriter and celebrated multi-instrumentalist has only ever had one thing: a bones-deep love for music. He weathers the storms of that all-consuming passion in his first new release in nearly four years, “Fist Through This Town” (Worsham, Jeremy Spillman, Travis Meadows). The fire-in-his-belly, Springsteen-tinted country rocker picks up Worsham’s story following the release of his 2017 album Beginning of Things, which, along with his debut Rubberband, earned widespread critical praise and year-end recognition from outlets including The Wall Street Journal, Variety, Rolling Stone, American Songwriter and more. Since then, the “undeniable musical talent” (NPR) has toured with Vince Gill and Old Crow Medicine Show, earning an ACM Awards Specialty Instrument Player of the Year nomination in the process. Frequently lending his co-writing and recording skills to artists including Eric Church, Luke Combs, Keith Urban and Kacey Musgraves, Worsham recently launched Air Castle Community Hour, a monthly show on WSM radio (home to the Grand Ole Opry) that celebrates the diverse community of creative spirits that reside in the 615. Now the beloved musician is ready to again share his own voice: “Fist Through This Town” welcomes listeners into Worsham’s anger, struggle, desire and, ultimately, love.