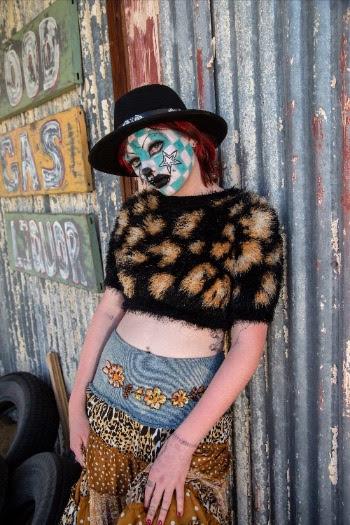 Rising artist carolesdaughter returns with her new single, “Trailer Trash” arriving today via Arista Records /Robots & Humans/Columbia Records UK. Listen HERE.  The track is paired with a striking music video shot in a deserted area in California and directed by Neta Ben Ezra. It brings to life an abandoned trailer park with Ozark meets The Walking Deadinfluences. carolesdaughter’s eye-catching look for the video was made possible by makeup artist Jessie Edelstein, with styling by carolesdaughter herself. “Trailer Trash” marks the up-and-comer’s first official release of 2021. Watch the official Video HERE.

carolesdaughter says, “I wrote trailer trash 2 years ago when I was in rehab. The song is about accepting the unique and sometimes trashy parts of you. The video was inspired by Bombay beach and the art there, I wanted to create my own world where I could do anything I wanted.”

carolesdaughter aka Thea Taylor has already struck a chord. After buzzing with previous releases, “cold bathroom floor” and “my mother wants me dead,” carolesdaughter wrote viral success “violent” over a somber beat laden with 808s and creaky acoustic guitar. She uploaded it to Soundcloud, and it quickly racked up two million streams. Now, the track has over 230 million streams across all platforms. It picked up plays at Radio 1 from Annie Mac, Mollie King’s ‘Best New Pop’ and Jack Saunders’ ‘Tune of the Week’. Plus further praise came from Sunday Times Culture, The Line of Best Fit, Wonderland, Spindle and an array of streaming highlights including the cover and #1 position in the notorious Misfits 2.0 playlist on Spotify.

carolesdaughter transmutes turbulence into strangely soothing alternative pop anthems awash in lo-fi glitch, bedroom acoustics, and gutter goth elegance. Like a fairy tale heroine with facial piercings and D.I.Y. spikes affixed to her shoes, she immediately captivates without fear or filter. An outsider since birth, she grew up as one of 10 kids in a strict Mormon household. After seeing a tattoo of the iconic logo, she researched Black Flag online and unlocked the worlds of punk, hardcore, and goth.

Bouncing between five different high schools, she started doing drugs, falling down a rabbit hole and taking multiple trips to rehab. On the last trip, she made a promise to pursue music upon returning home and ended up making major waves with the single “violent.” Amassing millions of streams independently and landing a deal with Arista Records, carolesdaughter makes an immediate connection on a series of singles and her forthcoming 2021 debut. She chose the name carolesdaughter in honour of her mom Carole.

Charlie Worsham Returns With “Fist Through This Town”