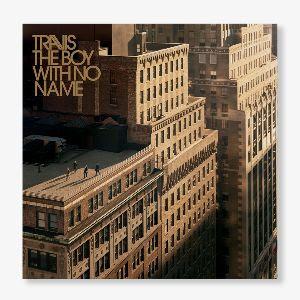 On May 28th, Travis’ 2007 top #5 album The Boy With No Name returns to vinyl for the first time cut at London’s Metropolis Studios with gatefold sleeve and bonus 7” single. As well as standard black vinyl, an exclusive limited-edition gold vinyl version is available for pre-order via the Travis official store and UK independent record shops.

In 2007, ten years on from the release of their debut album Good Feeling, much had changed for Travis – and yet, much remained the same. With frontman Fran Healy now a father (The Boy With No Name takes its title from a nickname briefly given to his son) his songs turned to the world of relationships, with single ‘Closer’ returning the band to the Top 10 of the UK singles chart & ‘My Eyes’ focusing on his newborn son. The album, which featured production work from Nigel Godrich and Brian Eno, was praised by the BBC as the Scottish band’s “most eclectic album to date”, the work of a band who “can afford to take risks” while receiving four stars from Q magazine.

“The Boy With No Name is a dense album,” Fran reflected. “Andy MacDonald, our A&R man fracked me hard, possibly a little too hard, for songs. As a result there were many strong contenders for singles. Battleships, Sailing Away, Big Chair among some which should have been released but never made it. As a result it’s possibly our most eclectic album packed with some our most memorable songs.”

The Boy With No Name’s re-release comes on the heels of the vinyl reissue for Travis’ debut album, Good Feeling (released April 2nd on Craft Recordings). Leading up to the release, all four band members participated in an exclusive Q&A conversation with mega-producer Steve Lillywhite, who they worked with 24 years ago on Good Feeling. Click HERE to watch Travis in conversation with Steve Lillywhite.

The Boy With No Name

Pre-Order The Boy With No Name LP

About Craft Recordings:
Craft Recordings is home to one of the largest and most essential collections of master recordings and compositions in the world. Its storied repertoire includes landmark releases from icons such as Joan Baez, John Coltrane, Creedence Clearwater Revival, Celia Cruz, Miles Davis, Isaac Hayes, John Lee Hooker, Little Richard, R.E.M., Joan Sebastian, and Traveling Wilburys. Plus, the catalog recordings of celebrated contemporary acts including A Day to Remember, Evanescence, Alison Krauss, Nine Inch Nails, Taking Back Sunday and Violent Femmes, to name just a few. Renowned imprints with catalogs issued under the Craft banner include Fania, Fantasy, Fearless, Musart, Nitro, Panart, Prestige, Riverside, Rounder, Specialty, Stax, Vanguard, Varèse Sarabande, Vee-Jay and Victory, among many others. Craft creates thoughtfully curated packages, with a meticulous devotion to quality and a commitment to preservation—ensuring that these recordings endure for new generations to discover. Craft is also home to the Billie Holiday and Tammy Wynette estates which preserve and protect their respective names, likeness and music through day-to-day legacy management of these cultural trailblazers.