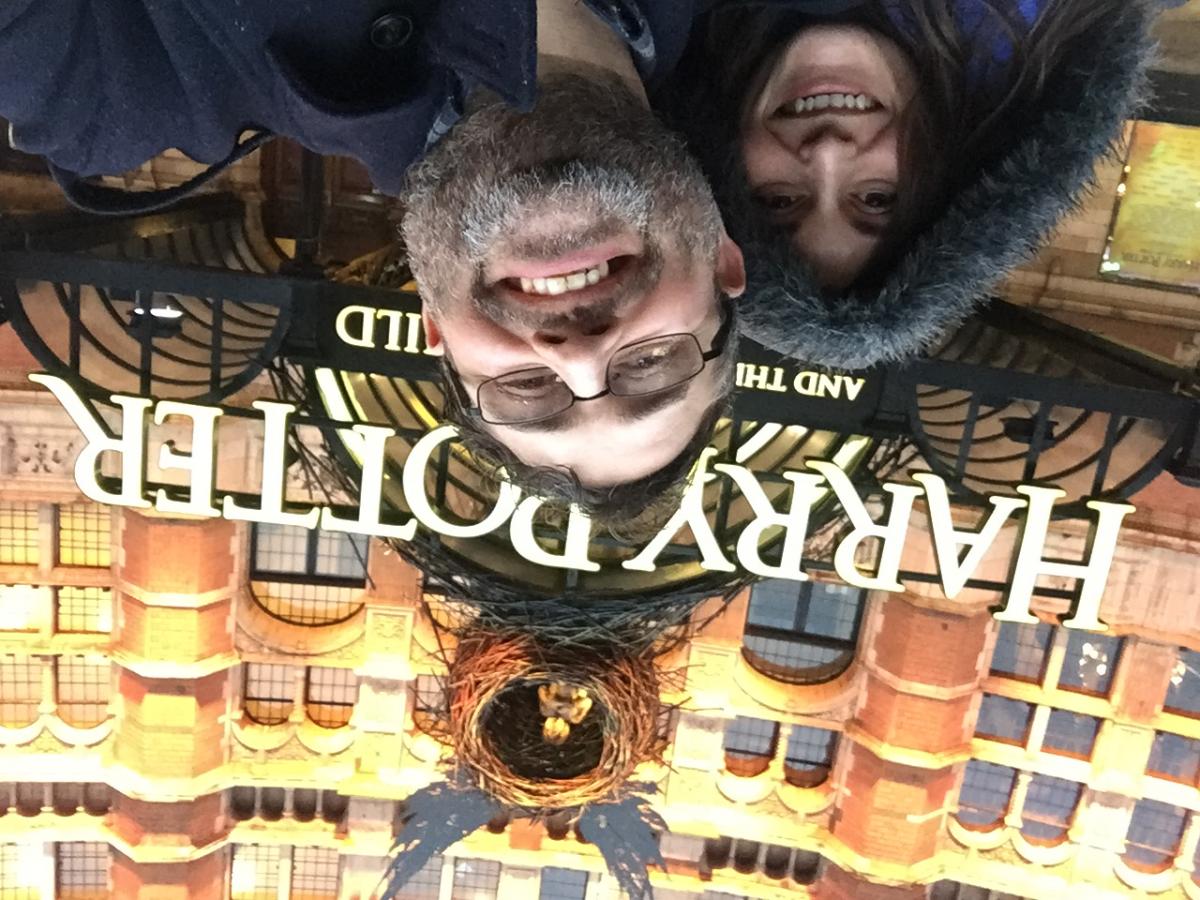 It’s not been the best week. And I blame Harry Potter. It all started really well. I mean you saw my blog last week didn’t you? (it’s here if you didn’t) I had lost five pounds in one week. That was amazing. So last Sunday I was walking on air without a care in the world. I now weighed under 18 stone. I had a smile that most felines from Cheshire would have been very jealous of. But then it all came crashing down on Monday. I knew something was wrong as soon as I woke up. There was just something in the air. Something very ‘Monday’ about the place. Do you know what I mean? As always, after my obligatory scratch and searching morning look into the mirror to try and get meaning out of our finite lives, I stepped on the scales. And I had put on four pounds overnight.  In that one 24 hour cycle I had gone from 17 stone 13 pounds to 18 stone three pounds. I didn’t even know that was possible. Where had this extra four pounds come from? Okay, I had a roast lunch on the Sunday (which was lovely by the way) but the night before I had just had soup. You don’t get more ‘dietty’ than soup and I had been well within my 1500 calorie daily limit. Had the opposite of the tooth fairy come along and injected more fat into me? Is this being called the ‘fat fairy’? How else do you explain this unexplainable phenomenon of putting on weight overnight? I must have been visited by the ‘fat fairy’. There’s no other rational explanation. It made me want to chuck the whole lot in. And, admittedly, I had a bad day on Monday because of it. In my head I had given up on the whole enterprise. I was picking at chocolate and generally being a right pillock. So it was no surprise that the Fat Fairy (who now deserves capital letters) visited again on Monday night. On Tuesday morning I was back to 18 stone 4 pounds. My start weight. I kind of exploded at this point and I’ve got to admit I acted like a complete moron and started chucking blame around like grenades. I’m sorry to say my long-suffering wife bore the brunt of this and I’m not proud of my actions as I blamed meal-times, the Sunday roast dinner and anything else I could think of. I should have known that the Fat Fairy had come for a visit (or the more scientific explanation put to me in a rational manner by my sensible wife that my body was storing fat for energy as it was reacting to the fact that I was eating a lot less.) Somehow on Tuesday I carried on. It was probably the fact that I was only nine days into the year and would look a bit stupid to give up at this stage. By Wednesday morning, I had marshalled the troops and got back down to 18 stone and by Thursday morning I had got down 17 stone 12 pounds. This was a bloody rollercoaster. A white knuckle ride of boomerang weight gain and loss. If you’ve read this far and are wondering what the billy heck I’m going on about (having not read the introductory blog on January 1) you can read the original blog here In short I’m trying to lose three stone by June before I start training properly for the Birmingham Marathon which takes place in October where I will be raising money for ICP Support.

Harry Potter and The Half-Fed Dunce

And then on Thursday the whole thing went out the window once again as along came Harry Potter. My wife’s a bit of a fan you see. Well, when I say ‘bit’ she actually puts the ‘fan’ into fanatic when it comes to the boy wizard. So back in October 2015, 15 months ago, they released tickets for the stage play of the eighth story in the Harry Potter saga called Harry Potter and the Cursed Child. It was like Glastonbury as I was put into a two hour wait for what turned out to be very expensive tickets as it was for not just one production but two productions. Essentially it meant that we were going off to see Hermione and co on Thursday evening for Harry Potter and the Cursed Child Part One and then having to hang around in London to see Harry Potter and the Cursed Child Part Two on the Friday evening. The things you do for geeky love. This kind of threw my entire keeping fit and dietary routine out of whack. (But I’ve got to say that it was so worth it as we’re both still buzzing about the play (s) more than 48 hours later) On the Thursday, it was a bit easier to keep to my routine. As part of my Nike + training app, I had to do a half hour workout of stretching and aerobics first thing which left my legs like jelly (which was great considering I would be spending the rest of the day walking around London!) But I managed to control my food intake so as not to upset the calorie counting.

I Fell at the Ninth

But then I fell at the Ninth on the Friday lunchtime which meant for that 24 hour period my entire diet was shot to pieces. You might be asking yourself what is The Ninth? Okay, you might recognise the name of this chef that we interviewed in The Ocelot a few years ago. His name is Jun Tanaka and I’ve kind of fallen in love with his food (.. he was also a couple of years above me at school which is why he crossed my radar). Anyway, he used to be the Michelin Star chef at The Pearl in London and has appeared on telly a fair bit over the years. In late 2015 he opened a restaurant on Charlotte Street in London called The Ninth and it is one of the best places in the world ever even gaining its first Michelin Star last year within its first 12 months.

It’s based on sharing plates of exquisite Mediterranean dishes and it is like heaven for anyone who likes food. And I love food a lot (hence why I’m 18 stone). It’s pretty informal and relaxed at the Ninth and although you are eating top tier quality food you’re not stuck in some silver service stuffy restaurant but in a place that doesn’t cost the earth and where you just simply sit back and enjoy. I knew that the diet would be shot as soon as Jun suggested that he would choose the best dishes for us. And it was. Shot that is. As fantastic plate after plate was delivered out to us. There’s no way any diet can survive that. Check out Jun’s restaurant here and I would recommend that if you like eating you should definitely go there.

So Friday was a wash-out and I must admit it did leave me reeling a bit and wondering what my next weigh-in on Sunday would be like. How much damage did I actually do? On Saturday we were back from London and I managed to get the diet under control again and even do a bit of a weird running thing because my Nike + slave driver app told me to which was 4 times 400 metres in as quick a time as possible. This morning the app told me to do seven times 200 metres as fast as I could which I did. Every run at the moment leaves me feeling like jelly legs and light-headed but I must admit I found the stop-start getting your breath back bit of these last two runs a bit easier. My Nike + app has got a programme of running and workouts for me that will take me through to the end of February at the moment. So then we had this morning’s weigh-in. Remember on January 1, I was 18 stone four pounds with a 120cm waist and then last Sunday on January 8, I was 17 stone 13 pounds with a 117.5cm waist. So this morning on January 15, I was 18 stone exactly with a 116cm waist. This means I’ve managed an overall weight gain of one pound over the last seven days which I’m quite pleased with considering the topsy turviness of the week. But more importantly my waist measurement is now 4 cms down from when I started which is a good sign. This month I want to lose at least half a stone so that I’m on track for the three stone loss. At the moment I’ve got three pounds left to lose this month. But overall I’ve got 38 pounds still to lose (which is a bit scary!) Let’s hope the Fat Fairy doesn’t visit next week. Yours hopefully, Fat Jamie

Romance in the heart of Wiltshire