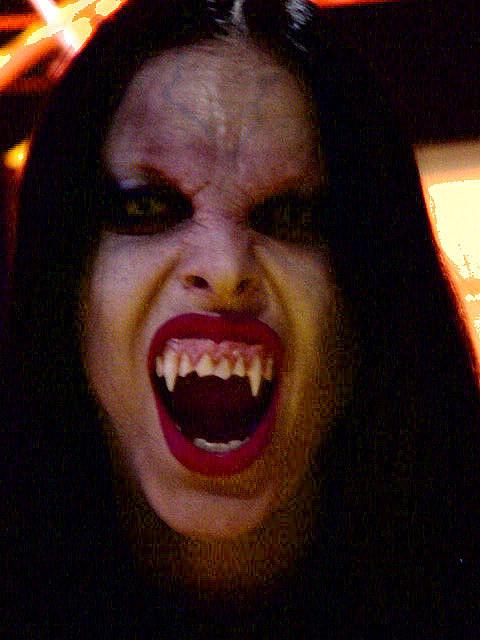 “I did it to protect our NHS,” said Ms Doreen Dracula, 349, after being caught standing over the exsanguinated corpse of Mr Robert Roberts, 41, in a quiet suburban avenue last night.

Ms Dracula, a descendant of the original King of the Vampires and Blood-Drenched Terror of the Carpathians, added that Mr Roberts, who had shared his childhood home with his domineering widowed mother and had not previously experienced so much as a peck on the cheek from a woman, had seemed quite glad of her attentions.

“I keep myself in trim, even if I do say so myself,” she added. “In fact, people have said I look like Fenella Fielding in Carry on Screaming in certain lights.

“Not daylight, obviously. And I have to take their word for it, what with not having a reflection.”

Ms Dracula was draining the last corpuscles from Mr Roberts’ mangled carotid when a posse of Police Community Support Officers and council wardens on lockdown patrol approached and told her she’d be charged with murder.

“After all, what had I done apart from giving a rather lonely person the thrill of a lifetime?

“Admittedly I killed him, but I couldn’t help wondering what was the difference between me and, say, some politician ordering covid-riddled elderly and vulnerable people to be locked into care homes, knowing they’d die in their tens of thousands?

“Or some politician ordering restrictions on movement which are several months too late, thereby largely pointless, and only likely to make foolish people act recklessly out of sheer spite?

“Then I realised - the politicians get away with it by saying they’re protecting the NHS.

“So that’s what I told the PCSOs and council officials. I even made sure to call it ‘our’ NHS to give the impression that I was anything other than a bloodsucking monster and actually cared about mortals.

“Unfortunately, they told me that particular Get Out of Jail Free card was reserved for MPs and peers of the realm.

“Luckily, though, Mr Roberts happened to revive at that point and threatened to give the lot of them a right old biting unless they slung their hook, so they ran away to look for easier targets.”

Mr Roberts declined to comment, as he was making plans to transfer to the night shift at work, trying to muster the courage to ask the Goth on the switchboard for a date and calculating how many deluxe DVD box sets of obscure classic sci-fi and horror series he’d need to last him for eternity.

“By Jove, the Brexit Bus money!” relief for Manchester as Boris remembers he has £350m a week kicking around after all