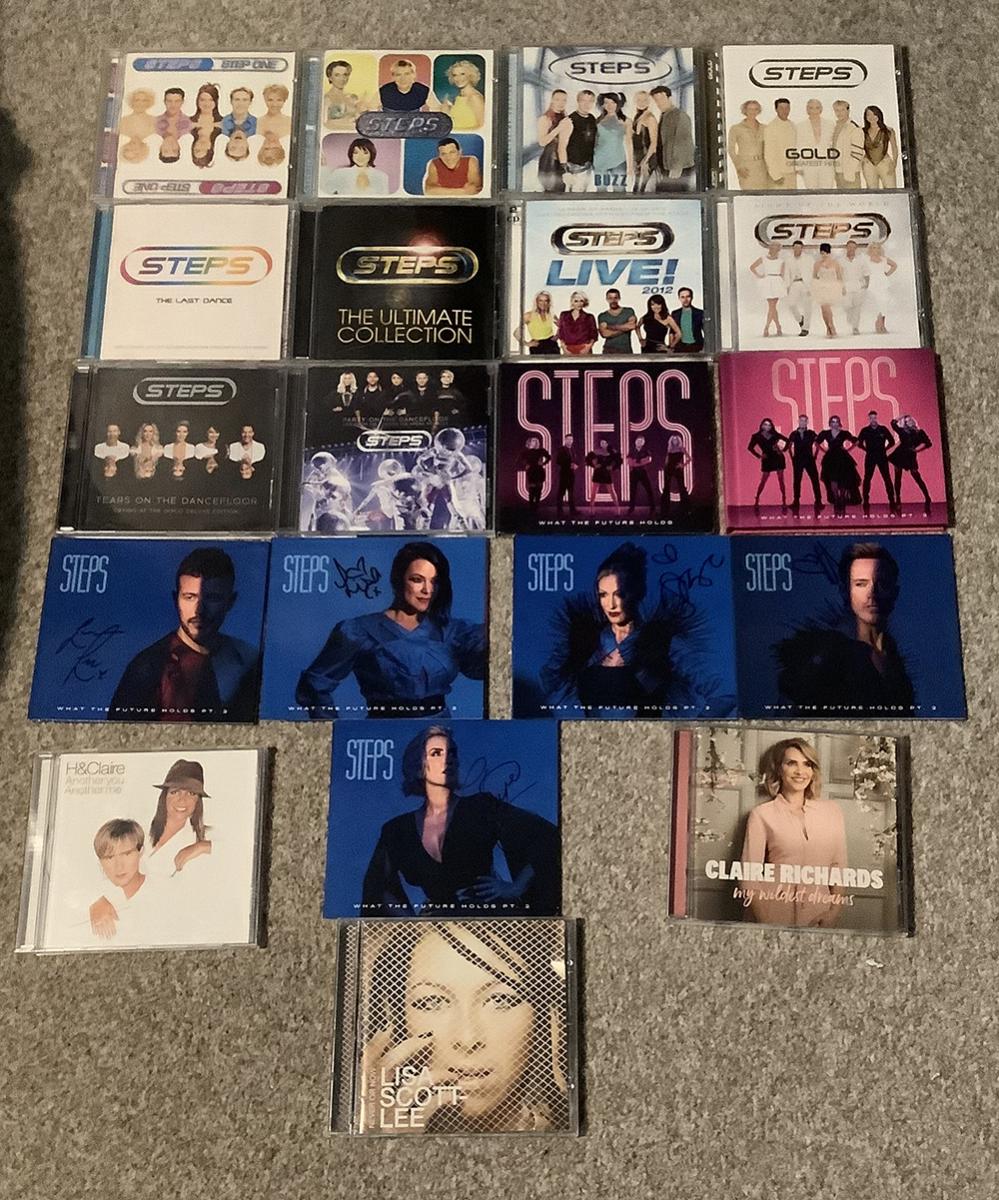 Hey everybody it’s Tyler here. I am doing a deep dive into the career of pop group Steps.

Steps are a British Pop Group who formed in May 1997 after seeing an ad in The Stage magazine to audition  the lucky five who were chosen Lee Latchford Evans, Faye Tozer, Lisa Scott Lee, Ian “H” Watkins and Claire Richards.

In the early days of Steps they were managed by Tim Byrne and in November 1997 Steps relased their First single the line dancing 5,6,7,8 it sadly did not peak at any of these numbers and charted in the UK at Number 14  but went to number one in Australia.

5,6,7,8 went on to become Steps thrid best selling single of their career.

20 April 1998 saw the relase of Last Thing On My Mind which was a cover of the 1993 hit by legendary girl group Bananarama Steps version of the song peaked at Number 6 in the UK and topping the charts in Belgium.

Summer of the same year their thrid single One For Sorrow this single went to number 2 in the UK and again topped the charts in Belgium. there were two videos for the single one for Europe and one for the US.

One For Sorrow charted at number 38 on the US Dance Club and was the only single to chart on the US Billboard.

14 September 1998 Steps released their Debut Album Step One which hit the number 2 mark and went 5 times platinum in the UK and topped the Belgium Album charts and went 2 times platinum over there.

During which time Steps were in the studio recording their second album.

July 1999 saw the release of Loves Got a Hold on My Heart which is quite appropiate as it sounds really summery.

Couple of months later Steps relased After the Love Has Gone which was a top 5 in the UK.

Three more were released off Steptacular Say You ll Be Mine UK number 4, Deeper Shade Of Blue Number 4 in the UK and When I Said Goodbye UK Number 5.

At the end of 1999 Steps released a cover of Kylie Minogues Better The Devil You Know which was a double a side with Say You ll Be Mine peaking at number 4 in the UK.

3 July 2000 Steps released Summer Of Love which again was a double A side with When I Said Goodbye which peaked in the UK at number 5.

October 2000 Steps released Stomp which became their Second and Last UK number 1 single and a couple of weeks later Steps released Their third album Buzz which peaked at number 4 on the UK album charts .

New Years Day 2001 Steps released Its The Way You Make Me Feel which peaked in the UK at number 2.

June 2001 Steps released a double a side consiting of Here and Now and Youll Be Sorry which went in the charts at Number 4 and was the last single to be released of Buzz.

September of the same year Steps released a cover of Chain Reaction which peaked at Number 2 in the UK.

October 15 2001 Steps released thier Gold Greatest Hits Album which peaked at number 1 in the UK Album Chart and toured with the album from November to December 2001.

On 22 December 2001 at Manchester Men Arena H and Claire announced they were leaving the band before the gig started but went on as a five piece for the final time.

Boxing Day 2001 Steps announced that they were to split up and went their seperate ways.

Their Last single was All Out Of Love/Beauty and the Beast which charted at number 10 in the UK.

A compelation called The Last Dance was released in 2002 after the break up.

H and Claire released their Album Another You Another Me which peaked at 58 on the UK Album Charts.

Claire left the Spotlight in 2003 and married Dancer Mark Webb but ended in Divorce 18 months later. in 2005 Claire reunited with Rees Hill and in 2007 she gave birth to her son Charlie.

A year later Claire appered in Celebrity Masterchef and performed Tragedy on ITV1 Everybody Dance Now. Claire and Rees married on November 1 2008 and in December 2009 Claire gave birth to her Daughter Daisy.

in 2019 Claire released a solo album called My Wildest Dreams.

H went on to work in the world of theatre such as performing in Joseph and the amazing technicolur dreamcoat  and in 2007 appeared in Celebrity Big Brother and in 2016 H via surrogate became a father to twin boys named Macsen and Cybi.

Faye Tozer went on to appear in theartre productions such as Love Shack and Me and My Girl in 2009 Faye became a mum to her son Benjamin and later in the same year Faye married Michael Smith which was televised for Celebrity Four Weddings and in 2018 she participated in Stritcly Come Dancing.

Lisa Scott Lee went on to manage her brothers in their band 3SL and have a solo career and on 12 May 2003 she released Lately which went in at Number 6.

September of the same year her second single Too Far Gone  which went to number 11.

in 2005 Lisa starred in Totally Scott Lee which was tranmitted on MTV and had challenge to get her single Electric in the top ten but reached number 13.

2007 saw the release of her debut album Never Or Now which was only released on CD in certain terroteries but an import was released through Play.com and Amazon.

In 2008 Lisa gave to her son Jaden and a year later gave birth to daughter Star Lily.

Lee Latchford Evans went on to appear in theatre and carv a career as a personal trainer.

In 2012 he married his long term girlfirend Kerry Lucy Taylor and in 2021 they became proud parents to their son.

2011 Steps reunited after ten years away and went on to appeare on Steps Reunion for Sky Living and release  The Ultimate Collection which went to number one in the UK.

in 2012 Steps went on the Ultimate tour which i went to on the 19 April date at London O2 arena and it was a fantastic experience and definaltlly was a massive party for us fans.

On 12 November of the same year Steps released Light Up The World and went on a 6 date UK tour.

August 2022 to Celebrate 25 years Steps are releasing a Platinum Collection Album with all theigretaest hits form 1997 to 2021.

Helpful Tips for Getting Wedding Guests to RSVP