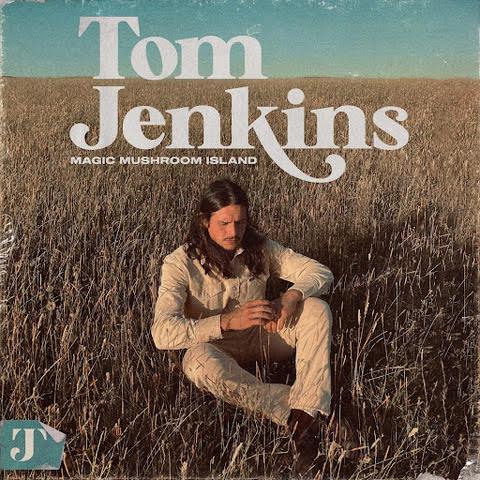 Straying slightly from his acoustic folk-tinged roots, “Magic Mushroom Island” is an exhilarating new cut with larger-than-life instrumentals and an exultant earworm chorus. Building to an electric crescendo with roiling riffs and a colossal guitar breakdown that nods to the legendary works of Led Zeppelin, Jenkins is also joined at the track’s climax by esteemed Motorhead guitarist Phil Campbell.

Where previous single “Back Roads” was a softly simmering country-tinged track that paid homage to Jenkins’ affinity for agriculture, “Magic Mushroom Island” bubbles over with blistering vocals and rip-roaring riffs. Buoyant and broiling in equal measure, the track’s influences are as multifarious as its sound, with everything from cult Leonardo DiCaprio film ‘The Beach’ to hallucinogen-hungry university students and iconic rock artists of old cited as influences.

Speaking on the story behind the single, Tom explains:

“When writing the new album I wanted to slightly break the singer-songwriter mould and go against the indie-folk sound of my first album. “Magic Mushroom Island” draws influences from some of my favourite rock bands, such as Fugazi, Silverchair and Manic Street Preachers.

Lyrically, the song is a celebration of strangers in the depth of lockdown. I had not left my farm in the hills of the South Wales Valleys or seen a soul for weeks, until a number of random people started showing up and scouring the fields. Apparently word was getting around a local uni that our fields were rich in Magic Mushrooms and it was quite the hot spot. It reminded me of the film ‘The Beach’ which influenced the title. This random occurrence did bring much joy and laughter with strangers to a somewhat lonely time.”

With a fully fleshed-out rugged rock sound, the craggy new cut sees Jenkins nod to music greats of old whilst setting himself up on a trailblazing path all his own.

Alongside its slightly softer older sibling “Back Roads”, “Magic Mushroom Island” is the first glimpse into a new album the singer-songwriter has been working on, which is set for release on Xtra Mile Recordings later this year.  Tom began writing, producing and recording a second solo album during lockdown: working with lifelong friend and producer Todd Campbell, the pair began to lay down foundations between an old barn on Tom’s farm and Todd’s local studio. Gathering together old pals that he has shared the road with over the years, the project will feature guest appearances from Phil Campbell (Motorhead), Marc Ford (The Black Crowes) and Paul Mullen (YOURCODENAMEIS:MILO, The Automatic).

With the album expected for release much later in the year, fans can catch Tom Jenkins performing tracks ahead of time at a series of intimate acoustic shows this Spring plus festivals confirmed for the summer. Dates and details are as follows:

Carlos Santana fans in for a treat at Swindon Arts Centre