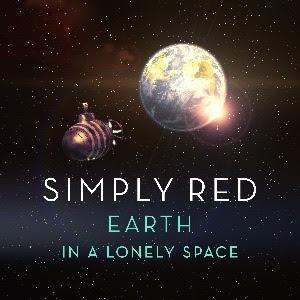 Written by Mick Hucknall and produced by Andy Wright with engineering/mixing by Gavin Goldberg at Home Studios and SouthWest Studios, ‘Earth In A Lonely Space’ takes us back to the melodic songwriting of the 60s with its layered instrumentation and ethereal sound. The accompanying video, directed and animated by the team at Cine1080, takes us on a lonely, but stunning journey through space.

“The earth itself is in a lonely place,” Mick said of the track. “It’s the job of any artist to try and capture the moment and right now, a lot of people are isolated and alone.”

Watch the video for ‘Earth In A Lonely Space’ HERE

Simply Red head on a huge UK and Irish tour in February 2022, including two must-see shows at London’s O2 Arena. Support on the tour comes from Mica Paris. Tickets on sale now from myticket.co.uk/artists/simply-red

Mick Hucknall has been Simply Red’s songwriter and bandleader since the very beginning in 1985, aided by long-serving saxophonist Ian Kirkham since 1986. The current line-up has remained consistent since 2003, and the new tour will play to the core strengths of this fantastic band. “I want them to enjoy playing, for crowds to get up and move around, and everybody to put their heart into it. It’s all about capturing the groove.” says Mick.