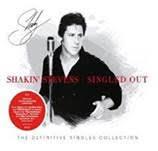 Shakin’ Stevens has returned to the Official UK Album Chart Top 10 with the BMG released ‘Singled Out’, his first Top 10 entry since 2005’s ‘The Collection’. A new entry at number 10, the 54 track, 3CD/ 2LP collection is the first ever to include all of Shaky’s solo singles.

Over the moon on hearing the news, Shaky said ‘In at number 10! We couldn’t be happier! A big thanks to all the team, who have worked so hard on the project, and to everyone who has supported me - it really means a lot to me.”

Spanning from 1977’s ‘Never’ to ‘Down In The Hole’ (from the 2016 album ‘Echoes Of Our Times’), and the previously unreleased ‘Wild At Heart’, ‘Singled Out’ also includes Shaky’s four UK No.1 singles ‘This Ole House’, ‘Green Door’, ‘Oh Julie’ and of course his Christmas classic, the perennial ‘Merry Christmas Everyone’ – the video for which was recently re-released in 4K.

The UK’s bestselling singles artist of the 1980s, Shaky is one of our most enduring and beloved music heroes with 4 UK No. 1 singles, 15 top 10s and 33 top 40s, an aggregate year-plus in the top ten, more than four years in the top 40 and an almost endless run of gold, platinum and double platinum albums at home and throughout Europe and beyond.‘Singled Out’ is available HERE

‘Singled Out’ also stands as a superb companion piece for the impressive Fire In The Blood bookpack, also out now, which Shaky describes as “the biggest project of my career.” Fire In The Blood is the biggest and most complete collection of Shaky’s recordings ever undertaken - a celebration of the achievements of an enduring artist whose chart statistics, however phenomenal, tell only part of his story. He says proudly: “Working on the compilation of the tracks, with the varied styles of my music, collating the images, and other aspects of the release, has brought back many precious memories: hard times, good times, and everything in between.”

Catch The Play That Goes Wrong in Bath until 16 January