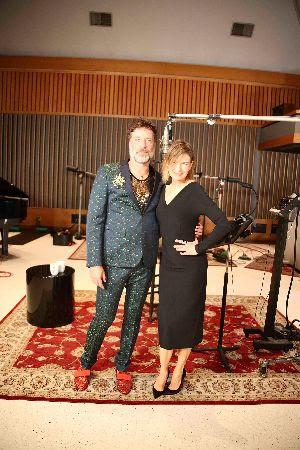 2x GRAMMY® Award-nominated singer-songwriter Rufus Wainwright has announced plans for another landmark virtual concert event. Rufus Does Judy at Capitol Studios will see Wainwright performing his groundbreaking 2007 tribute to Judy Garland, Rufus Does Judy at Carnegie Hall, in its entirety, live from Los Angeles’ famed Capitol Studios. The event will premiere Thursday, June 10 at 8:00 PM (AEDT/EST/CET), celebrating what would have been Garland’s 99th birthday. Tickets for Rufus Does Judy at Capitol Studios are available now exclusively via Veeps priced at $30 (advance)/$35 (day of show). There will also be ticket bundles available with the opportunity for fans to participate in an intimate Q&A with Rufus priced at $60 (advance) / $65 (day of show).

PURCHASE TICKETS FOR RUFUS DOES JUDY AT CAPITOL STUDIOS

Rufus Does Judy at Capitol Studios will see Wainwright backed by a four-piece band in front of a micro-audience composed of 2x Academy Award-winning actress Renée Zellweger, winner of last year’s “Best Actress” Oscar for her spectacular performance as Garland in 2019’s Judy. In addition, Wainwright will be joined musically by award-winning star of stage and screen Kristin Chenoweth in person at Capitol Studios and his sister Martha Wainwright from Montreal.

“The American Songbook and Judy Garland’s famed 1961 Carnegie Hall concert gave me a lot of hope after 9/11 and lead to the idea for my first song by song recreation of that show at the same venue. It felt fitting to do the entire set again as the dazzling finale of my Rufus-Retro-Wainwright-Spective and hopefully the beginning of the finale of this global pandemic. Once again, these songs revealed their healing power. To be able to sing them in front of Renée, to sing with Kristin Chenoweth and still have my sister Martha be part of these shows was particularly meaningful although to sing them into the very microphone that Judy used for her recordings at Capitol Studios was the most mind-blowing ,” says Wainwright.

“I am still awed by Rufus’ voice just as I was 22 years ago in a friend’s living room where I heard him perform for the first time,” says Zellweger. “Witnessing Rufus do the entire Judy Garland Carnegie Hall show was the most special day and I loved sharing the time.”

The first complete performance of the Rufus Does Judy tribute in five years, Rufus Does Judy at Capitol Studios will be commemorated with a limited edition t-shirt created for the occasion in partnership with Wainwright’s longtime friend, legendary designer Michael Kors. The t-shirts will be available via Rufus’ Merch Store for pre-order immediately and in Michael Kors Collection stores nationwide isn’t it globally? towards the end of May, with all proceeds benefitting LGBT human rights organization OutRight Action International through June – Pride Month 2021 – or while supplies last. The t-shirt marks the latest collaboration between Kors and Wainwright, who earlier this month performed music for the blockbuster launch of Kors’ 40th anniversary collection for Fall/Winter 2021.

Rufus Does Judy at Capitol Studios – which marks a rare complete performance of Wainwright’s now-legendary homage to 1961’s Judy Garland At Carnegie Hall – showcases more than twenty-five American standards spanning swing, jazz, and pop, including three songs by George & Ira Gershwin, two Rodgers & Hart classics, two from Howard Dietz & Arthur Schwartz, plus favorites by Harold Arlen, Yip Harburg, Irving Berlin, Noël Coward, and more. Among the highlights are such Garland signature songs as “The Man That Got Away,” “Zing! Went the Strings of My Heart,” “Swanee,” and of course, “Over The Rainbow,” along with a special bonus rendition of “Get Happy,” which was not performed by Garland at the original 1961 concert.

Wainwright recently wrapped up the 2021 leg of A Rufus-Retro-Wainwright-Spective!, an ambitious virtual live series that saw him revisiting his groundbreaking studio albums in their entirety, with one album side performed for each date, including rarely played deep cuts, stunning new arrangements, and a bonus selection of signature cover songs chosen by fans around the world. The series culminated last month with performances of last year’s GRAMMY® Award-nominated Unfollow The Rules as well as two nights of career-spanning Rarities (originally collected in 2011’s epic box set, House of Rufus). A number of recent concerts are available to rewatch through Saturday, May 1 – for tickets and complete information, please visit rufuswainwright.veeps.com/stream/schedule.

Wainwright’s ninth studio LP and first new pop album since 2012, Unfollow The Rules finds the multi-faceted artist at the peak of his powers, entering artistic maturity with passion, honesty, and a new-found fearlessness while remaining as creative, bold, and mischievous as ever. Produced by Mitchell Froom (Crowded House, Paul McCartney, Randy Newman) at a variety of legendary Los Angeles studios, the album proved among last year’s most honored releases, earning a prestigious GRAMMY® Award nomination for “Best Traditional Pop Album” as well as a Juno Award nod for “Adult Alternative Album of the Year.”

An ingenious, compellingly charismatic live artist, Wainwright hopes to see his fans in person later this year on his long awaited Unfollow The Rules Tour. For scheduled dates and other information, please visit rufuswainwright.com/tour.

ABOUT OUTRIGHT ACTION INTERNATIONAL
OutRight Action International fights for the human rights for LGBTIQ people everywhere. OutRight works at the international, regional and national levels to research, document, defend, and advance human rights for LGBTIQ people around the world. Registered as a 501c3 non-profit in the US, OutRight has staff in six countries and works alongside LGBTIQ individuals across four continents towards lasting change. OutRight is the only LGBTIQ organization that has a permanent presence to advocate at the United Nations Headquarters in New York for progress for LGBTIQ people, with special consultative status that allows it to address the concerns of LGBTIQ people globally at this important world forum.

For more information or to make a donation, please visit outrightinternational.org.

Rachel Redford to star in Cat Goscovitch’s A Russian Doll