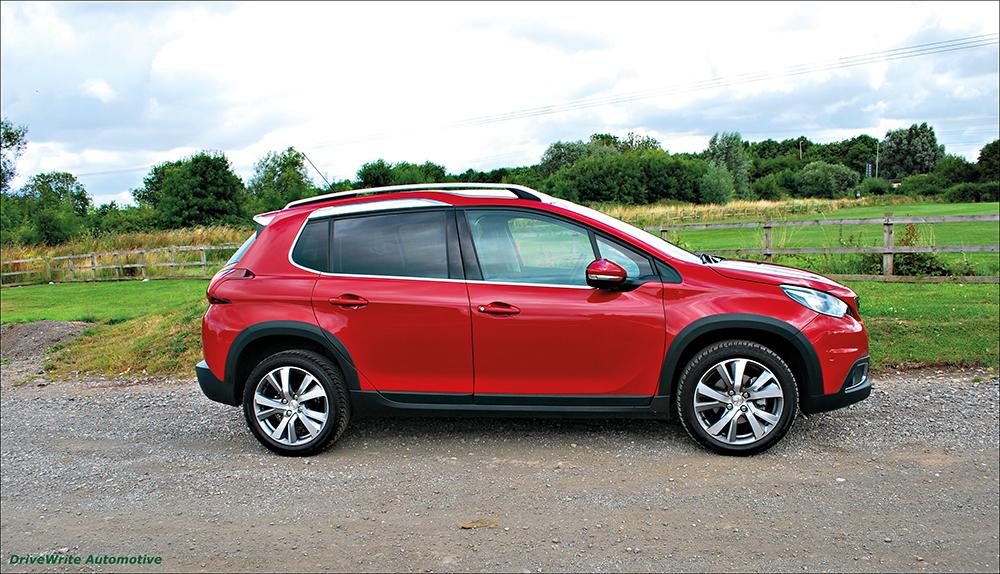 By Geoff Maxted of drivewrite.co.uk

Looking at the reviews for the improved 2016 Peugeot 2008 you would be forgiven for thinking that nobody can make up their minds.

But taken as a whole the Peugeot 2008 – here featured in Allure trim with a BlueHDi 118bhp diesel engine – is, as Frank Carson is wont to say, a cracker.

The Peugeot 2008 has been revamped for this year. It’s mostly cosmetic with a new frontal appearance with latest in-house design codes and new grille treatment. This model gets wheel arch extensions and scuff plates. A special word for the terrific paint, a new ‘Ultimate Red’ that has a multi-layered varnish treatment. Other hues are available.

The tested motor is, as mentioned, in the penultimate trim level but you can cough up a bit more for the new ‘GT Line’ model, for a more sporty aspect.

Allure gets you part-leather seats that have adequate manual adjustment with sufficient reach and rake on the small but perfectly formed steering wheel. Most drivers will fit, although space behind a tall pilot is a tad restricted. The test car costs just shy of £20k so the French company have done well to present such a neat and attractive interior.

Back seat customers are well catered for with comfort but your lanky fellows will find it tight. Good for children though and this car is crying out to be on the short list for a 2+2 family unit. The boot is sufficient at 410L with the fold-flat, split-folding seats up.

The i-Cockpit is unique to the brand and is something of a highlight. The compact sports wheel offers precise steering and improved manoeuvrability while the easy-to-use 7” multifunction colour touch screen puts all the functionality at your fingertips. Features include the now expected toys and Peugeot’s Connect SOS & Assistance feature. In addition, the head-up cowled instrument panel allows driver information to be accessed without taking the eyes off the road.

It would not be unfair to say that this is one of the best looking dashboards in this extremely competitive small Crossover/SUV sector. It is mercifully low on button count and, for example, climate can be controlled by a quick flick of a switch. The ‘carbon-fibre’ effect plastic fascia is soft and, sure, there’s some budget plastic around but it is not obvious or cheap-looking so the overall ambience inside is one of high quality.

First up then is ‘Grip Control’ - an adapted selectable traction system for the front wheels only – which gives the Peugeot 2008 versatility on trickier terrain. 4WD it’s not but on a track or slippery grass it works well.

The Euro6 engines (the diesels are 1.6L BlueHDi and the petrols 1.2L PureTech, both with various power outputs) ensure a fuel efficient yet enjoyable drive through the six-speed manual ‘box. The 118bhp diesel as tested chases to 62mph in under ten and is lively and responsive if a bit noisy. This is especially good because at 98g/km it’s a road tax-free drive too.

The Peugeot 2008 offers car-like handling. Despite the higher ride height the small SUV acquits itself well on the road. Ride quality is up there with the best-in-class, and unlike some doesn’t roll hugely when cornering quickly.

This car doesn’t cost much more than the hatchback 208 and, as suggested, is a bit of a steal. Certainly the 2008 has more to offer than its smaller brother. With Grip Control for extra on-road winter security the bigger car is more versatile. With easily 50mpg (with Stop/Start) on the cards this upgraded version will satisfy most mainstream buyers.

Preparing your look for a day at the races