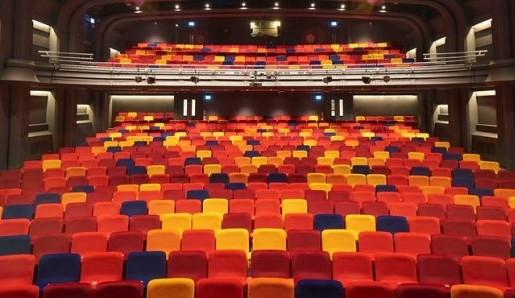 Following a critically acclaimed sell-out run at Arts at the Old Fire Station, Mike
Bartlett’s new play Mrs Delgado is transferring to Oxford Playhouse for one week only
from Monday 14 to Saturday 19 February 2022.Performances will take place in a specially
created auditorium on the Playhouse main stage with audiences sat right next to the action of
this one-woman play, performed by Ellen Robertson and directed by Olivier Award-Winner
Clare Lizzimore.
Mrs Delgado is a funny and poignant new play which tells a story of desire, control, raised
blinds and lowered boundaries during lockdown. It’s August 2020. As lockdown takes its
toll, a young woman Helen becomes strangely preoccupied with the behaviour of her elderly
neighbour Mrs Delgado. Unlike Helen, Mrs ‘D’ is not keeping to the rules. In fact, she is
flouting them, and she must be stopped.
Oxford Playhouse Joint CEO and Director Louise Chantal commented:
“I loved this beguiling, warm, funny celebration of ‘the best of us’ during those early months
of lockdown when everyone was looking out for each other.  Beautifully performed by Ellen
Robertson, this is an hour which will stay with you for much, much longer.  And it’s another
great opportunity to work with the wonderful team at the Old Fire Station!”
Mike Bartlett is a multi-award-winning stage and screen writer. He has won three Olivier
Awards for his plays Cock (Royal Court Theatre - Achievement in an Affiliate Theatre), King
Charles III (Almeida Theatre/Wyndham’s Theatre - Best New Play; also winner of Critics’
Circle Award for Best New Play), Bull (Young Vic – Olivier Award for Achievement in an
Affiliate Theatre). He also won the UK Theatre Award for Best New Play for Love, Love,
Love, which transferred to the Royal Court Theatre. Other plays include Snowflake (Old Fire
Station, Kiln Theatre), Albion, Game (Almeida Theatre), Wild

(Hampstead Theatre), 13, Earthquakes in London (National Theatre) and many others. He
has previously been Writer-in-Residence at the Royal Court Theatre, National Theatre and
Paines Plough. His television work has also won national acclaim, including hit BBC One
series Doctor Foster, which won BAFTA, National Television, Royal Television Society and
Broadcasting Press Guild Awards. Other television credits include Life, Press (BBC),
Trauma, The Town (ITV – BAFTA nominated) and the television adaptation of King Charles
III (BBC).
He commented:
“It’s great to be making theatre about the current moment. Mrs Delgado touches on those
experiences we’ve all had over the last 18 months, exploring how easy it can be to feel alone,
and what our connections and responsibilities are to each other.”

Director Clare Lizzimore is an award-winning writer and director. Mrs Delgado is her third
collaboration with playwright Mike Bartlett, following Snowflake (Old Fire Station, Kiln Theatre) and
Bull (Young Vic, Sheffield Theatres and 59E59 New York), which won the Olivier Award for
Outstanding Achievement in an Affiliate Theatre. She has also won a Channel 4 Theatre Directors
Award (Formally the RTYDS Award) and Arts Foundation Theatre Directing Fellowship; and she
was previously resident director at Citizens Theatre, Glasgow and staff director at the National
Theatre. Her other directing credits include One Day When We Were Young (Paines Plough/Sheffield
Theatres/Shoreditch Town Hall), Lay Down Your Cross, On the Rocks (Hampstead Theatre), Pieces
of Vincent (Arcola Theatre), Faces In The Crowd, The Mother (Royal Court Theatre), Fear and
Misery, War and Peace (Royal Court Theatre/Latitude), The Most Humane Way To Kill a Lobster
(Theatre503), and Tom Fool (Glasgow Citizens/Bush).

A one-woman show, Mrs Delgado is performed by Ellen Robertson in the role of Helen.
Her credits include An Intervention and Snowflake (also Kiln Theatre). Robertson and her
comedy partner, Charly Clive’s debut show Britney had a sell-out run at the Battersea Arts
Centre – the production first played at the Edinburgh Festival Fringe, Soho Theatre/ and
VAULT Festival – the show was also adapted for BBC3. Together they are developing a
scripted television project with Pure producers Drama Republic. As a writer, her work
includes Nesting (The Watermill Theatre), an episode of the web series Post Coital (which
she also starred in) and is currently working on a new play, Any Willing Provider. For
television, as an actor, her work includes The Pale Horse and In My Skin.
Tickets for Mrs Delgado are £20 and are available from the Box Office on 01865 305 305, or
can be booked online at www.oxfordplayhouse.com