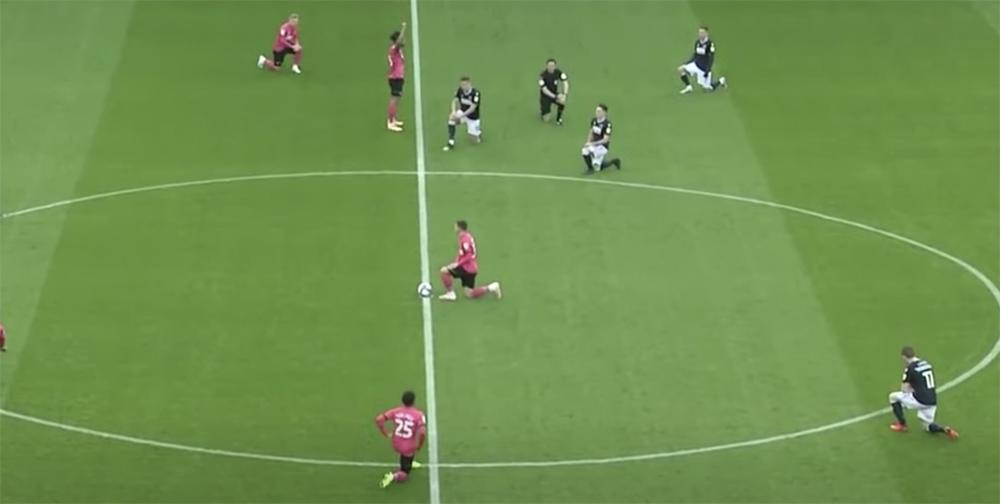 People throughout the country are still reeling with surprise after Millwall fans booed their own side and Derby County players for taking a knee before a match on Saturday.

Taking a knee has become an internationally-acknowledged way of showing solidarity with the anti-racist Black Lives Matter movement.

That is why the booing and jeers from Millwall fans, who are respected throughout the sporting world for their commitment to tolerance and multiculturalism, came as such a shock.

“It was a complete bolt from the blue, to tell you the truth,” said Bob Cockney, who runs a website devoted to football history.

“Millwall fans are the most placid and peaceful you could ever hope to meet, not to mention being among the most tolerant of the world’s glorious array of cultures, viewpoints, faiths and ways of life.

“They can’t abide cruelty in any form. That’s why, for example, they’ve spent decades promoting veganism by generously throwing fruit onto the pitch during matches.

“Bananas seem to be their favourite, presumably for aerodynamic reasons.

“The commitment of Millwall fans to conservation is also second to none. I’ve lost count of the number of times I’ve been at a Millwall game, whether at home or away, and thousands of fans have spontaneously highlighted the plight of endangered species - higher primates, mostly - by mimicking their calls.

“That is why the horrific behaviour before play began on Saturday caught everybody unawares.”

Millwall bosses have been stung by criticism over the incident, and in particular by people suggesting they should have taken steps to ensure that with attendance numbers limited by covid rules, racist thugs were not among the relative few admitted to the ground.

The bosses have promised to comb the most active part of the club’s fan base in search of enough non-racist non-thugs to fill such seats as are available.

A spokesperson said: “We haven’t quite managed it yet, but on the plus side we have discovered several hens with full sets of teeth, the fabled Lost Golden City of the Aztecs, Lord Lucan, a black tulip and the fabulous Amber Room last seen before it was looted from a palace near St Petersburg during World War Two.

“Oh, and Atlantis. And Doors singer Jim Morrison, presumed dead since 1971, working in a Cats’ Protection charity shop in Plymouth.”

Trump tells America: If I can't have you, nobody can