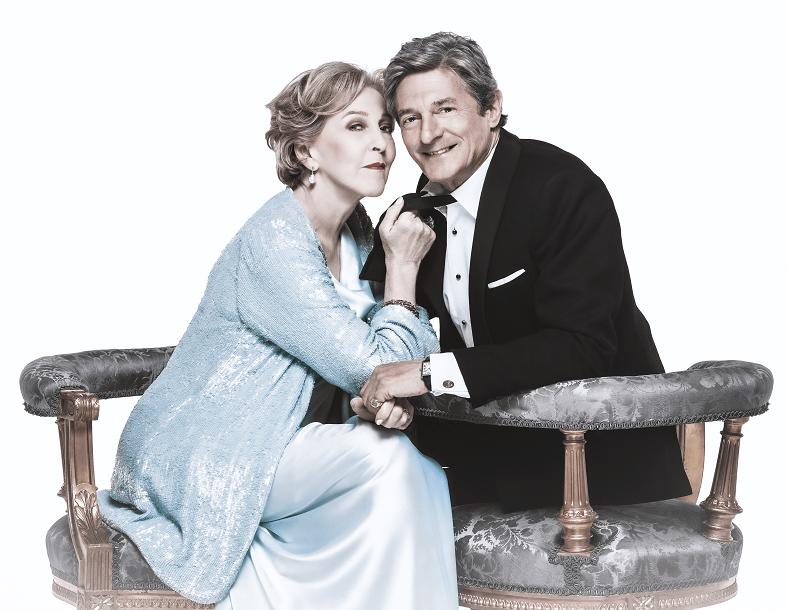 Gloriously entertaining and scintillatingly witty, a brand-new production of Private Lives
starring Nigel Havers and Patricia Hodge and directed by Coward connoisseur
Christopher Luscombe is coming to Oxford Playhouse from Tue 1 to Sat 5 March.
The inaugural show from The Nigel Havers Theatre Company, Private Lives is Noël
Coward’s dazzling comic masterpiece.
Elyot (Havers) and Amanda (Hodge), who were once married, find themselves in adjoining
rooms in the same hotel on the French coast, both on honeymoon with their new partners.
Their initial horror quickly evaporates and soon they’re sharing cocktails and a romantic
serenade.
Patricia Hodge’s many theatre credits include A Day in the Death of Joe Egg at Trafalgar
Studios, Copenhagen at Chichester Festival Theatre, Travels With My Aunt at Minerva,
Chichester, Relative Values at the Harold Pinter, Calendar Girls at the Noel Coward Theatre,
The Country Wife at Theatre Royal Haymarket, His Dark Materials, Noises Off, A Little
Night Music, and Money all at The National Theatre– the latter for which she won the Olivier
Award for Best Supporting Actress. Her recent television credits include ‘Ursula Thorpe’ in
A Very English Scandal and ‘Penny’ in Miranda both for the BBC, and ‘Mrs Pelham’ in
Downton Abbey for ITV.
Nigel Havers’s television credits include ‘Roger’ in Finding Alice for ITV and ‘General
Ransom’ in All Creatures Great &amp; Small for Channel 5. Other recent television credits
include ‘Lewis Archer’ in ITV’s Coronation Street, ‘Stanley Keen’ in Benidorm and ‘Lord
Hepworth’ in Downton Abbey also for ITV. Theatre credits include ‘Serge’ in the UK Tour
and West End productions of Art, ‘Algernon Moncrieff’ in the UK Tour of The Importance of
Being Earnest and ‘Maxim de Wynter’ in the UK Tour of Rebecca.
His film credits include playing ‘David Niven’ in The Life and Death of Peter Sellers,
‘Hofstadter’ in Paradise Lost, ‘Dr Rawlins’ in Empire of the Sun and ‘Lord Andrew Lindsay’
in Chariots of Fire.
Havers commented on the piece:“It’s a very funny play about love and friendship, so I hope
audiences are going to enjoy themselves. Goodness knows I think we’re all really ready to
enjoy ourselves.”
The cast is completed by Dugald Bruce-Lockhart as ‘Victor’, Natalie Walter as ‘Sibyl’
and Aïcha Kossoko as ‘Louise’.
Dugald Bruce-Lockhart most recently appeared as ‘Michael Gove’ in The Last Temptation
of Boris Johnson at Park Theatre. He has also played ‘David Cameron’ in The Three Lions at
the St James Theatre and Edinburgh Festival, for which he was nominated for Best Actor in
The Stage Awards. Other theatre credits include ‘Bill Austin’ in Mamma Mia! at the West
End’s Novello Theatre, ‘David Hart’ in Wonderland at the Hampstead Theatre, ‘Richard

Hannay’ in The 39 Steps on UK Tour and, for Ed Hall’s Propeller Theatre Company, he has
played the title role in Henry V, ‘Antipholus of Syracuse’ in Comedy of Errors and ‘Ratcliffe’
in Richard III.
Natalie Walter’s most recent theatre credits include Pack of Lies and Smash, both at the
Menier Chocolate Factory, Jerusalem at the Watermill Theatre, 50 Ways to Leave Your Lover
at the Bush Theatre, 39 Steps at the West End’s Criterion Theatre, Hay Fever at Chichester
Festival Theatre and, for the RSC, A Midsummer Night’s Dream and Love’s Labour’s Lost.
Natalie was a regular performer in the CBBC series Horrible Histories.
Aïcha Kossoko’s most recent theatre credits include playing ‘Alia Aminu’ in Josie Rourke&#39;s
production of The Vote at the Donmar Warehouse, Antony &amp; Cleopatra at Chichester Festival
Theatre and Liverpool Playhouse, The Taming of the Shrew for the Royal Shakespeare
Company, Welcome To Thebes and The Observer at the National Theatre and La Dispute at
the Abbey Theatre Dublin. Television credits include Skins, In Deep, Coronation Street,
Casualty, EastEnders and Kingmakers. She played ‘Lady Detective’ in BBC Radio 4’s
dramatization of The Number One Ladies Detective Agency.
PRIVATE LIVES will be directed by Christopher Luscombe, with set and costume
designs by Simon Higlett, lighting design by Mark Jonathan, music by Nigel Hess, sound
design by Jeremy Dunn, fight direction by Malcolm Ranson and casting by Sarah Bird.
The Nigel Havers Theatre Company’s Private Lives is produced by Theatre Royal Bath
Productions and Moss Empires.
Tickets for Private Lives at Oxford Playhouse start at £10 and are available from the Box
Office on 01865 305 305, or can be booked online at www.oxfordplayhouse.com