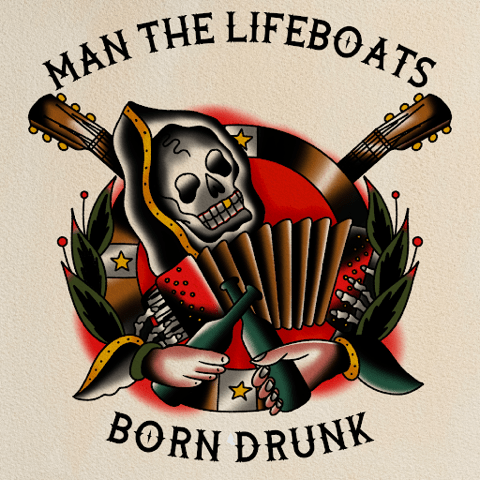 Salty seafarers - MAN THE LIFEBOATS - are delighted to launch their brand new album: ‘Soul of Albion’ - confirmed for release on 14th October 2022 via Wood Head Records.

Charting a new course with a breeze as stiff as they like their drinks, the quintet lead the way with the rip-roaring new single: “Born Drunk”, which you can listen to now:

A folk/punk firecracker broiling with fiddles, accordions and acoustic guitars played with gusto, it’s a rambunctious drinking song guaranteed to loosen your lips and get your pistons pumping.

Inspired by an unusual tattoo and a Martin Carthy song (amongst a menagerie of other things), “Born Drunk” takes the listener on a voyage through all that makes life’s rich tapestry so rich… and random. Led by frontman Rich Quarterman, it’s a breathless monologue that touches on politics and people, history and healthcare, religion and, well, getting royally rat-arsed. And in what’s got to be a lyrical first, there’s even time to rhyme “Palestine” with acting legend “Paddy Considine” too.

But what does it all mean? Rich Quarterman explains:

“Man The Lifeboats played a festival with the great Mr Carthy and he introduced one of his songs by saying: ‘this is a load of nonsense, it doesn’t mean anything’, which I’ve always thought was a fine approach to songwriting. The title came from a tattoo on an undisclosed person, and the rest of the lyrics are absolute nonsense. Or are they? Maybe there are some kernels of meaning in there somewhere. Paddy Considine features as his name rhymes with Palestine and Northern Line, but also because he’s an absolute hero and a brilliant actor. We tried to get him in the video but he was too busy with some TV show called Game of Thrones…”

Recorded more-or-less live at the iconic Rockfield Studios in Wales, the band cite a cocktail of influences including a hint of Hubert Parry’s Jerusalem, a dash of Pachelbel’s Canon, and slug of that Pogues Whiskey, that when thrown together ultimately get you “Born Drunk”.

“Born Drunk” arrives as the first taster of Man The Lifeboats’ keenly-awaited second studio album ‘SOUL OF ALBION’, which will be released later this Autumn. As we wrestle with our collective identity and culture, our glorious but tarnished history and our place in the world, the new record by Man The Lifeboats ultimately asks the question: what does Albion mean in the 21st Century?

Mirroring the journey undergone by a close friend of the band, it’s a record that traverses through the veins of our little islands, through their signs and symbols, the literature and art, poetry, song and dance, the traditions that are still alive today after centuries, and some which are not; in a search for some answers. With each song on the record intended to provide a snapshot of life on these islands, from Somerstown to Stourbridge, from the hills of Caledonia to the gates of Soho Square, ‘SOUL OF ALBION’ is a quest as brave as it foolhardy, as familiar as it new; and like many musical journeys that have gone before it, often raises more questions than it solves.

From full-throttle folk flings to darker ruminations, traditional instrumentals to tender ballads, and (of course) an obligatory ranting protest song, ‘SOUL OF ALBION’ sees Man The Lifeboats take all the winning ingredients of their 2019 debut, while taking their sound full-sail in intrepid new directions too. Produced and mixed by Jamie Evans, engineered by Jack Boston and mastered by Gav McGrath at Zvuk Mastering, the album was recorded at Rockfield Studios in Monmouth, Wales, in 2021.

“It’s the best thing we’ve done, it might even be the best thing we ever do. Jamie didn’t just produce the album, he threw himself into dragging some special performances from us, and he captured the heart and soul of this band. At its heart, it’s a collection of very personal songs, brought to life by this amazing band of players, sprinkled with a little Rockfield magic. When we were at Rockfield, it felt like we were making a big, important record. An epic. Why not?! Go big or go home!!”

A record brimming with energy and emotion that’s unafraid to ask the existential questions of just what it is to be British in 2022, ‘SOUL OF ALBION’ by Man The Lifeboats is released on 14 October 2022.

Around the release, Man The Lifeboats will be taking ‘SOUL OF ALBION’ to the venues of Albion, with live dates planned throughout November. A special album release party will also take place at a location with a rich maritime history - The Golden Hinde.

Catch the band this Autumn at these venues as follows: