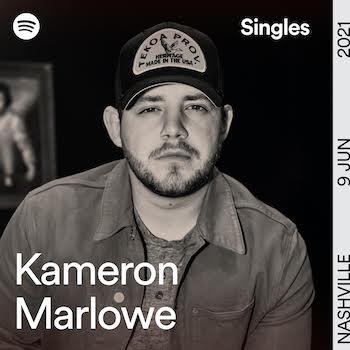 Recorded in Nashville, Side A is a stripped-down, piano-driven rework of his self-penned debut release and heartbreak anthem, “Giving You Up.” Side B is an impassioned, bluesy cover of Johnny Cash’s “Folsom Prison Blues,” showing off Marlowe’s arena-ready powerhouse vocals, while putting a twist on the classic tune.

“I chose to cover ‘Folsom Prison Blues’ because Johnny Cash is one of my all-time heroes. To me, he is the Godfather of country music, and I have always had nothing but respect for how his sound and songwriting have influenced so many artists, myself included,” said Marlowe. “And I decided to re-work ‘Giving You Up’ because I wanted to try something new. That song will always hold a special place in my heart, and it’s fun for me to try different styles every once in a while.”

Driving more than five billion streams since the program began in 2016, Spotify Singles was created to give artists an opportunity to record new versions of their own songs, the songs of the artists they love, or an original song. To date, there have been over 600 recordings from more than 300 artists across all genres. The complete list of Spotify Singles can be found HERE.

ABOUT KAMERON MARLOWE:
North Carolina native Kameron Marlowe has been touted as “the piece country music has been missing” (Everything Nash) and a “nascent talent” (Billboard). Since blasting onto the scene with his autobiographical, self-penned release “Giving You Up,” Marlowe has gone on to amass more than 170 million career on-demand streams; joined the roster of Columbia Nashville alongside superstars Luke Combs and Maren Morris; and been named an Artist to Watch in 2021 by more than a dozen media outlets and music platforms, including Amazon Music, Pandora, Spotify, Sounds Like Nashville, NY Country Swag, Country Now , and more – all before his debut single “Sober as a Drunk” even hit airwaves. The breakthrough star will join superstar Brad Paisley on his Tour 2021 throughout the summer, bringing his captivating live show to audiences across the country. With his soaring, emotive vocals and gritty, rock-infused sound, Marlowe calls upon influences ranging from Brooks & Dunn and George Strait to Travis Tritt and Ray Charles, creating a sound that reflects his life-long love of country music. Quickly becoming an undeniable force in the genre, Marlowe is set to stake his claim as the new face of country.