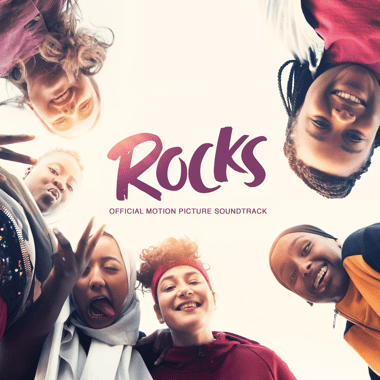 Island Records are proud to announce the release of the Original Motion Picture Soundtrack to the acclaimed girlhood drama ROCKS, which opens in cinemas across the UK and Ireland on September 18th.

Speaking about her involvement in the film, Ray Blk said: “Rocks is such an incredible movie that so many people, myself included, can relate to. I love the story of resilience, strength, and friendship and I believe it will resonate with so many young people so I’m really proud to have been a part of this powerful movie.”

The full track listing is as follows:

A new clip from the film has been released which can be seen HERE .

Uniquely crafted by a majority all-female creative team in collaboration with mostly first-time actors, ROCKS was written by Theresa Ikoko (winner of the Alfred Fagon award in 2015 for her play Girls) and Claire Wilson (Little Drummer Girl, Gangs of London, The Power), and directed by Sarah Gavron (Suffragette, Brick Lane) and associate director Anu Henriques.

This core group of British girls, who all come from differing cultural backgrounds including Nigerian, Somali, Polish, Bangladeshi, English and Congolese-Ghanaian, emerged out of extensive workshops in which they generously shared experiences of friendship, their cultures, social media and school life as part of the filmmaking process.

The film follows teenager Rocks (Bakray) who fears that she and her little brother Emmanuel (D’angelou Osei Kissiedu) will be forced apart if anyone finds out they are living alone. With the help of her friends, she evades the authorities and navigates the most defining days of her life. A film about the joy, resilience and spirit of girlhood.

“I had been working on an idea for a film, a love letter dedicated to my sister and other young black and brown British girls, who are often adultised and seemingly hardened, by society and circumstance. As children, many preserve their families and protect the childhoods of their siblings, while remaining beautifully complex wells of joy and love.

“When I was asked to be a part of the creative team for ROCKS, to make a film about young people, and importantly, with young people, I soon realised this was the richest and safest soil to plant my story, nurtured by the many women who contributed to ROCKS.”

You can follow the film’s social media channels on the links below.