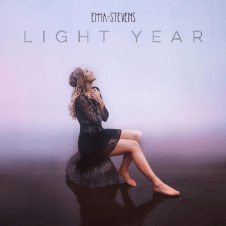 Emma Stevens to relese Light Year New album to be released on 30th April Following on from a clutch of successful teaser singles released over the last six months, Emma Stevens is set to release Light Year, her fourth studio album, on April 30th .The album is a beautiful eclectic collection of twelve songs in true Stevens style about hope, love, loss and humanity and includes collaborations with Grammy award winner Charlie Midnight (Billy Joel, Cher, Joni Mitchell, James Brown) and Pete Woodroffe (Simply Red, Melanie C, Joe Cook). The title track, Light Year, has a powerful message about feeling distant and removed – something many of us will relate to after the events the last twelve months –its fragile melody, thought provoking lyrics and exquisite string arrangement will give you goosebumps! Meanwhile, Jump In and Forever are two stand out punchy pop tracks with a strong energetic heartbeat – a nod to 80’s synth pop combined with Stevens’ lustrously pure vocals and trademark ability to write an irresistibly catchy tune. Another change of pace and another stunning string arrangement hail I Still Miss You – a raw tearjerker of a song Emma wrote about the loss of her Mum and how she continues to miss her even as the years roll on. In playful mood, The Cappuccino Song, already a huge hit in China, is another slice of mighty infectious pop which has become a firm favourite with live audiences even before the song has been released here. Emma says of the new album; “The songs all mean so much to me, I really hope they resonate with the people who hear them. It was such fun to experiment with new styles of production. There are some tearjerkers on this album, but there are also some really high energetic pop tunes. It was great to let my imagination run wild.” Light Year is available to pre-order on CD, Digital and Streaming now at https://smarturl.it/LightYearES