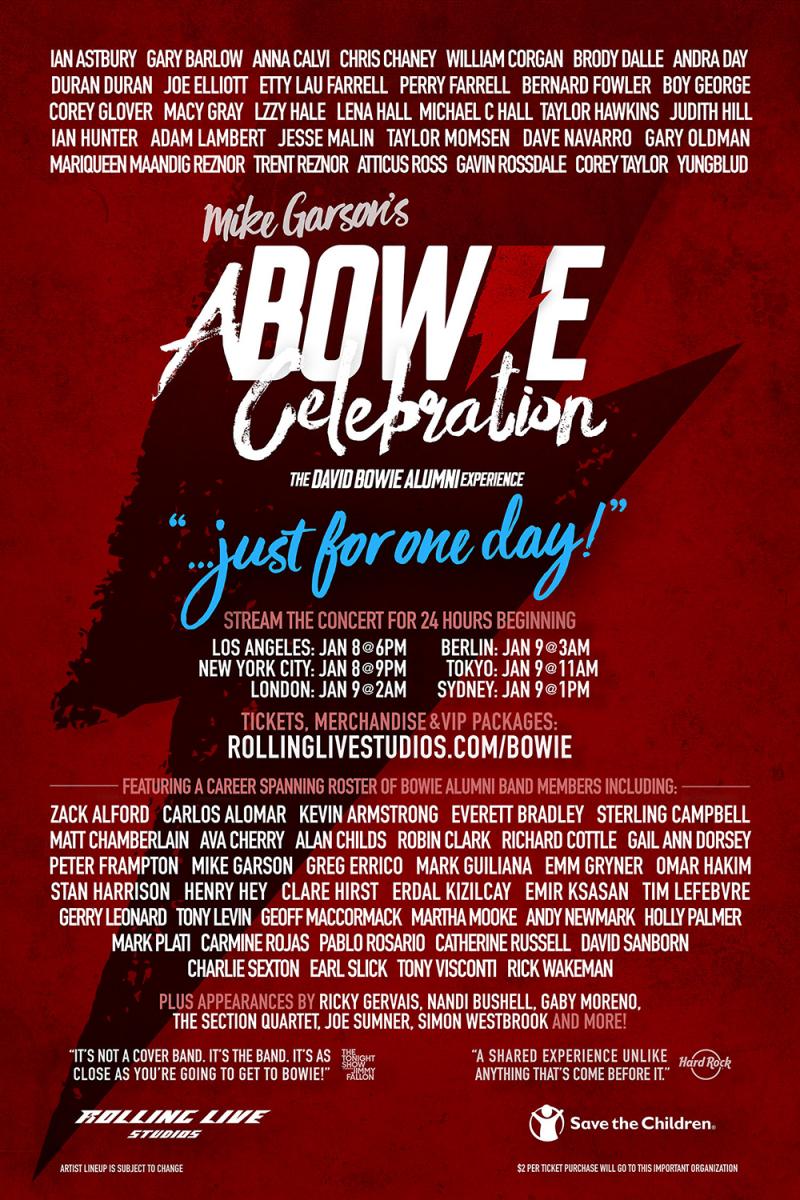 “A Bowie Celebration: Just For One Day!”
Concert Stream Lineup and “Save the Children” Beneficiary

Culture Club frontman Boy George, Pretty Reckless bandleader Taylor Momsen, Award-winning comedian and After Life star Ricky Gervais, and Ground Control supergroup with Dave Navarro (Jane’s Addiction), Corey Taylor (Slipknot, Stone Sour), Taylor Hawkins (Foo Fighters), and Chris Chaney (Jane’s Addiction) and six-time Ivor Novello Award winner Gary Barlow (Take That) will take the virtual stage for “A Bowie Celebration: Just For One Day!”, the global streaming concert bringing together a dazzling array of artists who worked with David Bowie or who were inspired and influenced by his work — for a celebration of what would have been his 74th birthday and the weekend of the fifth anniversary of his passing. Presented by Mike Garson, David Bowie’s longest-standing band member, the concert will stream on January 8 beginning at 6pm PT.

Produced by Mike Garson in partnership with Stacey Sher and Kerry Brown together with Rolling Live Studios, A Bowie Celebration: Just For One Day! will be an experience to be talked about for years, featuring a lineup of artists that have never before performed together offering stirring and brand-new renditions of Bowie’s greatest hits alongside treasured fan favorites.

A Bowie Celebration is proud to announce they will donate $2 per ticket purchase to the Save the Children organization, a charity that was deeply important to Bowie. In 1997, the organization was the beneficiary of funds raised from Bowie’s sold-out 50th Birthday Concert held in Madison Square Garden and featuring many of the artists who are coming together for this event to honor a man who was their band member, friend, and inspiration.

Starting at 6 pm PT/2am GMT, the show will continue to play on loop and will remain available for ticket holders around the globe to enjoy for 24 hours after its initial stream. With over three hours of music, the show will offer fans the opportunity to enjoy, reminisce and experience their favorite Bowie songs as never before — performed by David’s friends, bandmates, and those with whom he was the soundtrack to their lives.

Ultimate Ears Pro has partnered with Rolling Live Studios and A Bowie Celebration to provide artists with the industry standard in-ear monitoring solution for live performances. Fans can get their own set of collectible A Bowie Celebration inspired UE Pro earphones. The show will broadcast on RollingLiveStudios.com via Lucra, a new streaming platform built by Streamlabs. Ultimate Ears Pro and Streamlabs are a part of Logitech, a leading provider of audio and streaming tools.

“A Bowie Celebration: Just For One Day!” has joined with HYFI, a leading destination for the highest-quality 4K and HDR on-demand concert programming and virtual live entertainment, as an entertainment partner for the event. The concert will be available online, as well as via the HYFI app where fans can enjoy A Bowie Celebration on their televisions and other devices.

Fans can visit the event page at http://rollinglivestudios.com/bowie or HYFI.com/Bowie to buy tickets, purchase VIP experiences, and order exclusive merchandise. VIP ticket bundles offer fans a variety of exclusive opportunities and merchandise including everything from access to a pre-show soundcheck and an after-show Q&A with members of the band.

Artist lineup is subject to change. This sales promotion is conducted by A Bowie Celebration.

About Mike Garson
Universally respected for his impressive skills as a pianist, Mike Garson is a respected composer, performer and educator, as well. He is perhaps best known for his relationship with David Bowie which began in 1972 for Bowie’s first performances in the United States. Garson made his mark on dozens of Bowie albums and travelled thousands of miles with him on his world tours. In 2006, Mike accompanied Bowie for his final public American performance.

In more recent years, Garson has headlined his critically acclaimed concert production “A Bowie Celebration” touring the world with fellow alumni band members of Bowie’s bands along with world-class vocalists. He is also the subject of the international bestselling biography of his life, “Bowie’s Piano Man – The Life of Mike Garson” by Clifford Slapper.

Garson is as comfortable in jazz, classical, pop and the rock arena and is considered one of the world’s best improvisers who has also composed thousands of pieces in every imaginable style. He continues to be called into duty as the secret weapon behind billboard-topping, Grammy lauded albums, tours and longstanding artist success.

About Rolling Live Studios
Rolling Live Studios takes virtual live events to the next level. Since its inception, Rolling Live Studios has produced over 50 live virtual events and helped raise over $15 million in donations for an array of charities. Recent credits include On The Air, Chrysalis Night In – Virtual Gala, Richard and Demi Weitz’s RW Quarantunes, and livestreams for The Recording Academy. Rolling Live Studios was founded by Kerry Brown, who has managed and produced multi-platinum artists (The Smashing Pumpkins, Miley Cyrus, Cheap Trick, among others), feature films, television and video games (Blow, Along Came Polly, Scream, The Academy Awards, and more). Kerry produced the live multimedia show BLACKOUT, a collaboration between PepsiCo and the NFL to celebrate the Superbowl, and His Holiness the Dalai Lama’s 80th birthday party, among other live events.

About Save the Children
Save the Children believes every child deserves a future. Since our founding more than 100 years ago, we’ve changed the lives of more than 1 billion children. In the United States and around the world, we give children a healthy start in life, the opportunity to learn and protection from harm. We do whatever it takes for children – every day and in times of crisis – transforming their lives and the future we share.