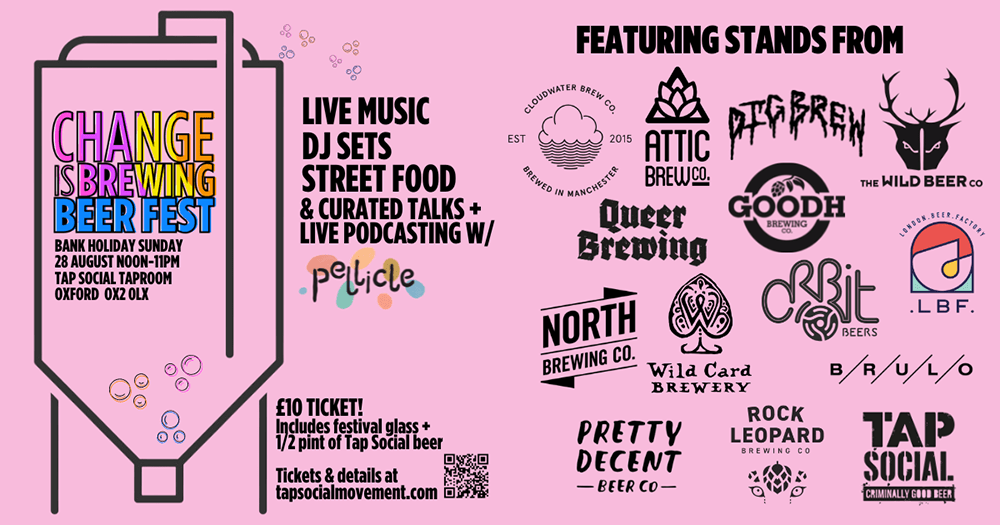 A late-summer beer festival in beautiful Oxford featuring fantastic breweries from around the UK? And on a bank holiday weekend? HECK YES! Tap Social Movement is proud to host the Change is Brewing Beer Fest on Sunday, 28 August, from 12pm – 11pm at the Tap Social Taproom in the Curtis Industrial Estate in West Oxford. We’re excited to welcome an incredibly diverse collection of breweries to Oxford, many of them for the very first time. Tap Social Movement (Oxford) - Cloudwater Brew Co (Manchester)
- Wild Beer Co (Somerset) - Goodh Brewing Co (Cornwall)
- Attic Brew Co (Birmingham) - Dig Brew Co (Birmingham)
- North Brewing Co (Leeds) - Wild Card Brewery (London)
- Queer Brewing (London) - Pretty Decent Beer Co (London)
- Rock Leopard Brewing (London) - London Beer Factory (London)
- Orbit Beers (London) - BRULO (Edinburgh) All breweries will be pouring their own beers all day long, so it’s a great opportunity to come down and meet them in person and learn what they’re all about! Beyond great beers, we’ll also have a stellar lineup of live music, DJs, and street food vendors throughout the day, PLUS live podcasting, curated panel discussions, and more led by Pellicle Magazine, the award-winning magazine and podcast devoted to beer, wine, cider, food, and travel. Full festival schedule and more details will be announced soon. Tickets are just £10 and inclusive of a festival glass and half pint of Tap Social beer. This is a family-friendly festival, though alcohol service is restricted to those 18+. Half-price tickets are available for minors aged 6 to 17; children 5 years and younger are free. Everyone under 18 must be accompanied by an adult. We expect the festival to sell out, so grab your tickets while you can! We hope to see you for what promises to be a memorable day out in Oxford with great people, good beer, and positive vibes.