Bob Marley: Songs of Freedom: the island years – 3cd set, and 6lp sets in both black and color vinyl 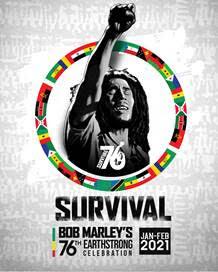 3CD SET, AND 6LP SETS IN BOTH BLACK AND COLOR VINYL – OUT FEBRUARY 5

Just in time for Marley’s birthday, the highly acclaimed Songs of Freedom: The Island Years, an extraordinary 6LP set, as well as a 3CD set, will be available worldwide on February 5. A limited-edition color 6LP set featuring two red, two green, and two gold vinyl LPs is also available.  Streamlined to the period of Bob Marley’s emergence and stardom, with rare tracks on vinyl for the first time outside Jamaica, Songs of Freedom: The Island Years is available to listen to or order HERE.

Bob Marley’s Tuff Gong Radio on SiriusXM will also join in the birthday festivities on February 6 with a special “All Bob, All Day,” format playing only music from the Bob Marley repertoire in between a series of special programs that begin with a new children’s show hosted by Ziggy Marley inspired by Ziggy’s Grammy-winning Family Time album and the recently-released follow up More Family Time. Additional programming will feature an exclusive “Survivor 76” party mix from DJ GQ, as well as highlights of the annual “Reggae Jam Session” concert, which traditionally closes the annual birthday celebrations at the Marley Museum in Kingston. The highlights line-up include the late great legends Toots Hibbert and Betty Wright and new performances from Kabaka Pyramid, Papa Michigan, Richie Spice, Tifa, Tanya Stephens, Skip Marley, Jo Mersa Marley, and Agent Sasco.  In addition, Kenny Chesney will help celebrate Marley’s birthday by joining the illustrious roster of Guest DJs previously featured on the channel, including Jack Johnson, Carlos Santana, Michael Franti, Big Boi, Cypress Hill, and more. The channel currently includes Marley’s studio and live performances, mixing his widely popular songs with rare tracks. Listeners will also hear recordings from the Marley family, cool exclusives, and artists who are a part of the iconic brand and label founded by Bob Marley-Tuff Gong.  Bob Marley’s Tuff Gong Radio is available on channel 19 and the SiriusXM app in the Hip-Hop/R&B category. Special programming will continue to air on the channel beyond Marley’s birthday in honor of Black History Month.

Peloton and Tuff Gong partnered to launch Peloton’s newest signature Artist Series today to kick off Peloton’s Black History Month programming and celebrate the birthday of the legendary Bob Marley, that exclusively features and celebrates classes designed around his iconic catalog. Starting February 3, Peloton Members will be able to work out to Bob Marley’s music, alongside a community of over 3.6 million, across fitness disciplines ranging from cycling, yoga, strength, and running.

The Peloton Bob Marley Artist Series features an assortment of live and on-demand classes, which can be enjoyed with and without equipment on the Peloton App (which currently offers new Members a free trial for two months through January). In addition to the music featured in Peloton’s Bob Marley’s class series, this collaboration will give Peloton access to the broader Marley catalog, allowing the brand to share the artist’s iconic music with its community. Instructors leading the Artist Series events include: Denis Morton (30 Minute Ride), Kristin McGee (30 Minute Yoga Flow), Emma Lovewell (10 Minute Core Strength), and Selena Samuela (30 Minute Run). To view the full schedule and for more information, visit: www.onepeloton.com.

Plus, Ziggy Marley will also be joining Malcolm Gladwell in conversation about his book, BOB MARLEY: PORTRAIT OF A LEGEND, in honor of Bob Marley’s birthday.  The glorious oversized book collects more than 150 photographs that celebrate the life and influence of reggae’s forefather and one of the greatest musical and sociopolitical icons of twentieth-century pop culture. The virtual Live Talks Los Angeles event will take place Saturday, February 6, 2021, at 5 pm PT/8 pm ET. For tickets or more information, click HERE.

On January 28, CEEK Virtual Reality and Tuff Gong announced a special Stephen Marley virtual performance, celebrating Bob Marley 75. As one of the final pieces of this yearlong celebration, the Grammy® award-winning Jamaican artist performed legendary Bob Marley’s songs. The performance is available now on Bob Marley’s official YouTube channel and www.ceek.com, as well as a Q&A on the CEEK VR App streaming platform. “In these uncertain times, it brings me great joy to be able to work with a platform like CEEK VR to spread One Love across the globe,” says Stephen Marley. The concert is also available in 360VR on CEEK’s Virtual Reality platform. The intimate concert will be a global event, bringing together fans under one virtual platform.

In this digital era, Bob Marley remains one of the most followed posthumous artists on social media, and MARLEY75 serves to bring his music and message to the digital foreground, reaching new audiences and perspectives with innovative content and groundbreaking technology. Special live events, exclusive digital content, recordings, exhibitions, plus rare and unearthed treasures will also be revealed throughout the year. Bob Marley’s music continues to inspire generation upon generation, as his legacy lives on through his message of love, justice, and unity, a sentiment needed more than ever. In conjunction with Tuff Gong and UMe, a division of the Universal Music Group, the Marley family will continue to ensure the highest quality, integrity, and care is taken to honor Bob’s legacy and to celebrate one of the 20th century’s most important and influential figures.

Bob Marley, a Rock and Roll Hall of Fame inductee, is notable not only as the man who put reggae on the global map, but, as a statesman in his native Jamaica, he famously brought together the country’s warring factions. Today, Bob Marley remains one of the 20th century’s most important and influential entertainment icons. Marley’s lifestyle and music continue to inspire new generations as his legacy lives on through his music. In the digital era, he has the second-highest social media following of any posthumous celebrity, with the official Bob Marley Facebook page drawing more than 70 million fans, ranking it among the Top 20 of all Facebook pages and Top 10 among celebrity pages. Marley’s music catalog has sold millions of albums worldwide. His iconic collection LEGEND holds the distinction of being the longest-charting album in the history of Billboard magazine’s Catalog Albums chart and remains the world’s best-selling reggae album. Marley’s accolades include inductions into the Rock and Roll Hall of Fame (1994) and ASCAP Songwriters Hall of Fame (2010), a GRAMMY® Lifetime Achievement Award (2001), multiple entries in the GRAMMY® Hall Of Fame, and a star on the Hollywood Walk of Fame (2001).  For more information, visit: bobmarley.com and facebook.com/bobmarley.

Picture This return with new single ‘Things Are Different’